Occasionally we all make statements or take positions that some time later we are forced into revisiting or reviewing, or, completely going back on. We see this a lot in cycling (“You’ll never ge me on a fucking 29er” or “He is DEFINITELY not on the juice!” etc) and hopefully its not something you have to do very often.

Here are two such items that I may or may not have taken a staunch position on in the last 12 months:

So, how do I feel this week when BOTH of these cast iron statements have been melted into oblivion and then reheated to be served as a buffet to detractors who now get to dine out on my sudden 180’s? Well, a bit like this guy really:

Yes, this is the exact moment when Mr Skywalker realised that he had pretty much become the biggest cunt in the galaxy and consigned his homeboys to becoming Piñata target practice for a bunch of clone fuck heads that all sounded suspiciously like Doctor Ropata, an alarming turn of events if you’ve been hyped up as much as this little bastard was. More talked up than Pierre Rolland even, and that takes some doing.

So, how did I manage this? Lets have a look at them individually:

“Fuck off, I would never buy a Specialized, its either Santa Cruz or Cannondale”

REALLY thought this one was true, as sure as I am about never running SHAM products, I was positive that the Big S was consigned to my mid 1990’s history forever. So, when mapping out 2014 and riding high on Gondola fever, it was pretty simple when it came to getting a DH bike right? Yes, a Santa Cruz V10 please. Bang, easy done.

Not so… Turns out that my dream bike is also prohibitively expensive, particularly for a bike that you will only ride 3 to 4 times a year (fuck up in the cheap seats talking about practically). Coupled with still being on “A year out”, this concept was somewhat stalled. There was also another annoying problem that was hard to ignore. There is one bike that is THE ubiquitous DH Park bike on the planet. Call it good design, call it clever marketing or perhaps just call it a good bike, but the Specialized Demo 8 is as popular as a free lap dance from Kate Upton at Friday night drinks.

What was the final tipping point? Well, it really was that man Snozza from Trailmix bikes (http://www.trailmix.com.au) that pushed me off my resolute perch of snobbery with a deal that makes you go “Fuck off, for real?”, not to mention some actual customer service and sense of urgency that is rare in the cycle industry. But what arrived today wasn’t just any normal Demo 8, no Ned, its the S-Works Carbon version with the custom made Ohlins rear shock, that will mean nothing to non-cyclists who have probably gone to have a piss at this point, but to put it in relative terms for you Toyota drivers, this is the Lexus version (which is great for soothing MTB status anxiety). I present to you the newest weapon in the arsenal – the Dirty Demo:

Whilst I like to indulge hating on the Big S for being the evil corporate villain of the MTB world, I do have to ask for seconds on the humble pie please, with some cream on top as this is one rather well put together bike once you get your mitts on it. Not to mention the Ohlins shock looks excellent and made by Swedish people, so it must be good right:

Stealth… Carbon… Big fuck off yellow shock, many boxes are being ticked

This beast also comes Dok approved, based on his extensive evil lab testing in the bone dry Perth HQ. This now not so secret project is obviously in its infancy, but watch this space as the build progresses and then eventually I will bring you one of my mainly worthless bike test rants, which will tell you fuck all about the actual bike’s performance – Thrilling. A massive thanks to Snozza for lining this up, we won’t quite call it sponsorship until he gives me a jersey, but its close. If you are in Melbourne then make sure you hire a helicopter and head out to see him in Lysterfield (wherever that is?). Special mention and thanks to Ice Station Zebra for being a mule, appreciated.

Just so happened that at the same time down the road, the local Santa Cruz dealer got in one of the VERY limited edition Greg Minaarr V10c’s. I can’t quite figure $11k USD for a DH bike, but it is beautiful: 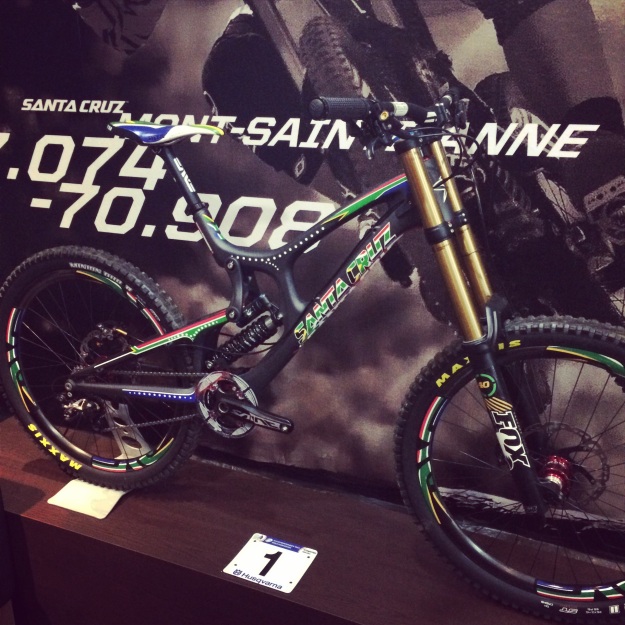 “I thought you were going to buy me? Why are you a traitor?”

So now that I have sold out my soul and dream bike quicker than a vote buying politician, what else could I do to possibly make my mid life crisis even weirder? Is there anything else left on the list which would allow people to scream “SELL OUT” at me when they see me walking down the street sweating as I am even too cheap to catch the bus now? Yes… as a matter of fact there is.

“Yeah right, as if I am going to get a fucking power meter, no chance”

Well, I am pleased to report that I staunchly held out for 3 days before putting on the Stages power crank that Snozza so strategically ambushed me with. Yes, I know, this is the worse of U Turns in the history of cycling, but like a freighter being sucked towards a small moon, I was unable to hold out:

Does this mean I don’t have to talk to people on rides any more?

Logically I can’t explain it… Perhaps its the wave of team euphoria we are riding high on at the moment? Perhaps its boredom? Perhaps its curiosity? Maybe I want to become an architect? Hard to say, but its one of my oddest cycling purchases ever as I am pretty sure that I don’t need it. However, we shall see how this transpires and what comes out of it and go from there. To be noted, this would not be Dok approved like the Demo is.

A final thought – This is an odd statement to make at the end of a post about buying new shit that I probably shouldn’t be investing in given, er, my current lifestyle, but there is one revelation I have come across since my volume of riding has increased significantly: The more I ride, the less gear I want.

Huh? Yes, I used to LOVE buying new gear and kit, but these days it doesn’t really give me the same buzz. This buzz has been transferred to the riding side of the equation. When new kit arrives I am instantly thinking about how and when I am going to smash it or maximise on it. I now want kit to be more reliable, not fail me in battle and to be able to take a beating day after day. I think about new chains and oil instead of buying the latest set of carbon wheels that have come out. Yes, this would appear contradictory, but I promise its not. Its like migrating from being a show pony to a work horse.

Its occurred to me that once you have the bike/s you need for the riding that you love doing, then it really is about the riding and not the kit at the end of the day, so my suggestion is to set your stable how you need it to be and then get busy working your horses hard – Wear out their tires, ride them until you have to change cables, pads and chains. Flog their pivots or BB bearings. Get them serviced and just keep on the fuck going. Form that emotional bond with your machine that only comes through epic riding or a killer training session… If you’re nodding with sage like acknowledgement right now, then respect. If you are frowning and thinking “What is this cunt on about?”, then perhaps you need to get out and ride 7 days in a row…