So it turns out that being one handed or dictating content means for a mega long posting process, obvious I know, but the background to why this has been so slow and may be light on in-depth content.

Before I launch into storytelling mode, as a quick update it turns out that I’ve broken not only my collarbone in three places, but also my elbow into a similar number of fragments. I shall elaborate on the incident below, but as bad as my injuries currently feel nothing can compare to what happened after I left Tour of Matabungkay behind.

In an extremely tragic turn of events one of the Kenyan riders, John Muya Njoroge, the overall race leader, was killed in an accident on Stage 3 of the race. You never want to see your fellow racers having any sort of accident at these events, but something of this magnitude is actually quite hard to comprehend. My thoughts and condolences go out to his family and to his team mates. I know this tragedy has given everyone a lot to think about. Rest in Peace John.

Back tracking a little bit, the race started like any other of these events, with the Goat locked into a seminar on tactics and race craft. Here we can see him brushing up on racing tactics when you are a team of two, apparently you sit in a lot: 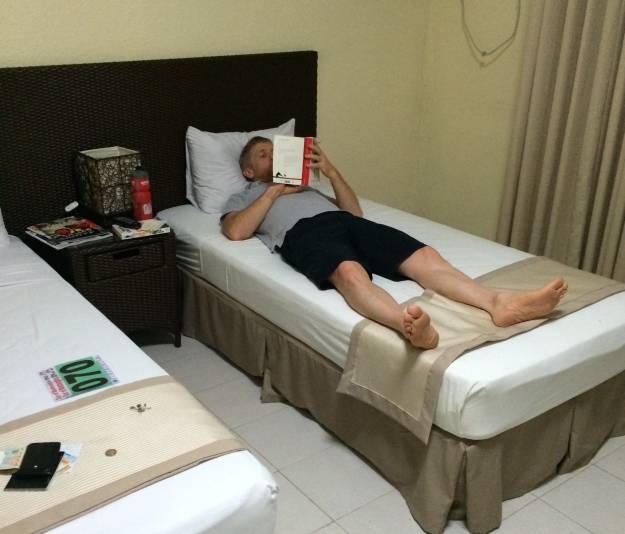 “A Goats guide to racing as a herd of two”

Day 1 loomed large with a 40km TT in the morning and an 88km Road Stage in the afternoon. Given my history with TT’s and the fact that I had never done one at this distance it was decided it was probably best to ride at 90%, especially given how many TT bikes turned up on the scene. For the Goat this meant starting at 90% and eventually ramping up to at least 120% as the race went on. Reinforcing this theme, he looked as aero as a shaved goat covered in sex lubricant, complete with matching smile: 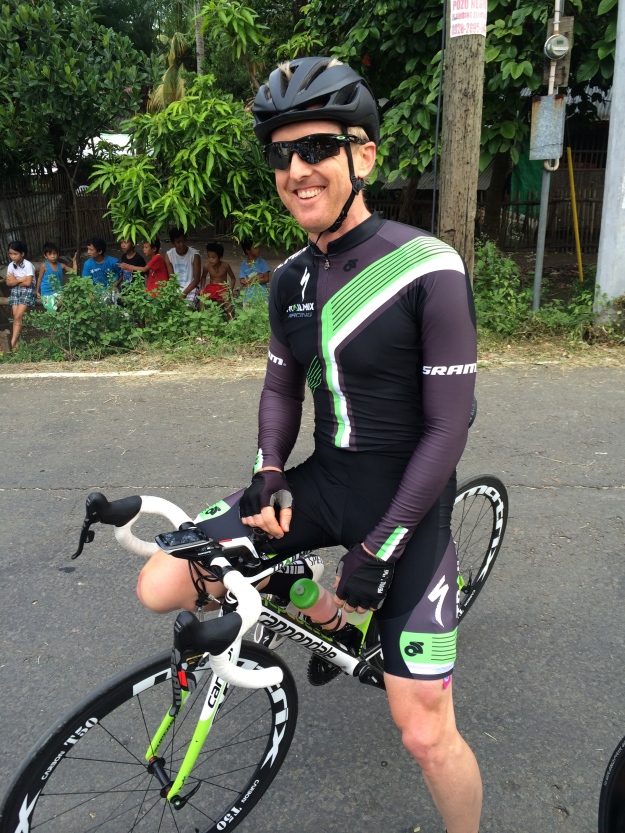 Whilst the Goat was prepared for the TT abattoir, I was busy doing the world’s shittest warm up which was punctuated by strange photo ops. If you’ve ever wondered where Filipino Big Mac’s come from I was lucky enough to stumble across the source. Possibly the oddest scenery shot I’ve ever brought you:

“you can milk anything with nipples…”

With my five minute warm up in the bag, it was time to bid au revoir to the Goat, there was no messing around as he blasted out of the upside down bouncy castle: 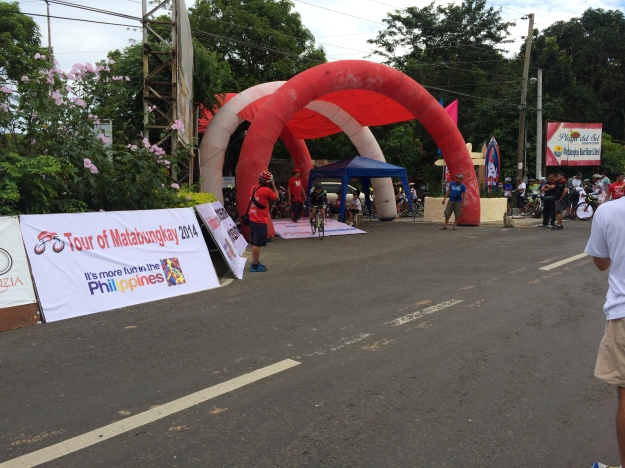 “The skin suit feels so good on my hide”

Look at him GOat, basically a sponsors wet dream, especially if you are selling products to white dudes in the 35-45 age bracket. Business time:

So thats enough kidding around about the Goat (being injured is clearly not helping my puns), I shall now attempt to explain myself and elaborate on how I managed to end my 2014 riding by crashing in an individual Time Trial. Sure the Colombian midget managed the same thing in the Vuelta but at least he can claim it was something to do with the corner, unfortunately I have no such luxury.

It started out in usual fashion, feeling like a hero for the first four minutes and then realising that there was a fucking long way to go. It also took about that amount of time to work out this was the most dangerous TT course I had ever had the discomfort of riding on. Mental traffic, including overtaking on-coming cars, rogue pedestrians, roadworks and a shitty road surface made it clear that it was not going to be straight forward morning on the bike. It also didn’t take long to become obvious that many of the elite riders didn’t quite grasp the concept that this was an individual TT with more drafting going down than a usual work commuting morning in Perth. I even saw groups of three rolling turns for fucks sake. I can only presume they were operating under a safety in numbers mode, as it turned out I should have probably done the same.

So, what the fuck happened?! Well, asking me to concentrate for a 40km TT is a bit like saying “no touching” during a lap dance, which is to say, its extremely challenging, and rather detrimental. I am still having trouble working out exactly what happened, but at 21 minutes in, it all went amazingly horribly wrong without a moments notice. I have narrowed it down to a couple of scenarios:

In the end, regardless of the above, it was 100% my fault, just made a mistake and paid the rather large ticket price. I think I was doing about 42kph or so when it all went to shit… the flight time straight into the road was maybe 0.02 of a second? The only thoughts that managed to register in my brain were absolute disbelief and that the large cracking sound was surely my collarbone…

I know using the word ‘lucky’ at this stage is probably bordering on being a crazy person, but if there had been a car coming in either direction I would have had much bigger problems. I’m going to elaborate on the risks of racing in remote locations in a future post, so will leave some stuff out here, but when I managed to drag myself over to the roadside, the thought competing in my head with utter disbelief was:

Since I had 25 minutes sitting on the side of the road in pain, I decided to double check my collarbone status with a relatively grotesque selfie, yip, it was SO sticking out: 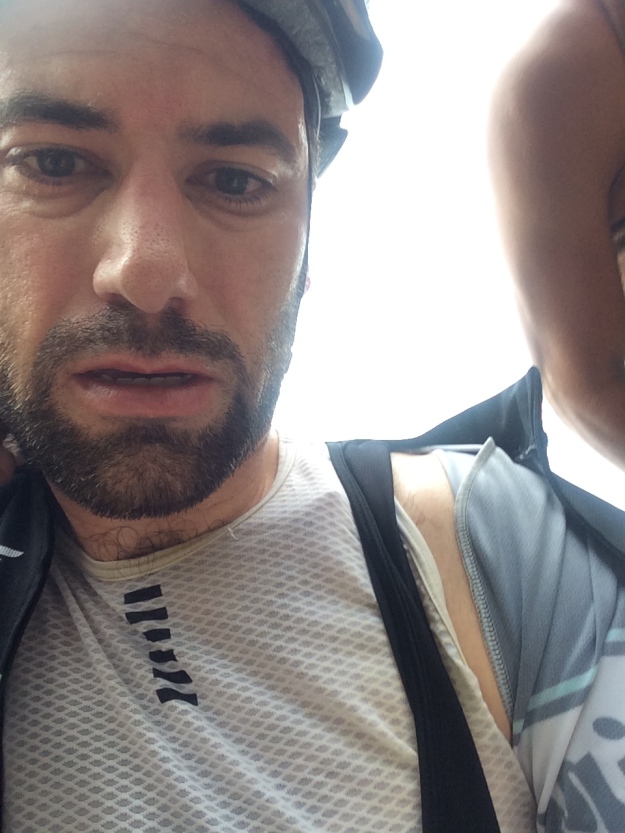 I won’t elaborate on my entire thought process now, as thats a wider topic to come in a later post, but I knew I had to get my busted ass to a hospital ASAP. Suffice to say, it wasn’t that straight forward when you find yourself cunted on the road side in the middle of nowhere in the Philippines. First up, dealing with the well meaning villagers that rushed to my aid – Yes, that did hurt like fuck when you move me… Yes, I know you’ve never seen someone manage to crash in an ITT… etc etc.

I decided it prudent to call the race organisers to make sure I actually got an Ambo on the way, conversation went a little like this:

It felt even more complex when he then hung up the phone… suffice to say the call back was less PC… some how the mayday call worked its way through the system and while it wasn’t fast, a 1992 Mitsi L300 Van pretending to be an ambulance, complete with Faux medics eventually turned up to collect me, as a bonus, its stretcher was from 1988, so an interesting experience. Here is a full lifelike reconstruction of events, complete with actual look on my face: 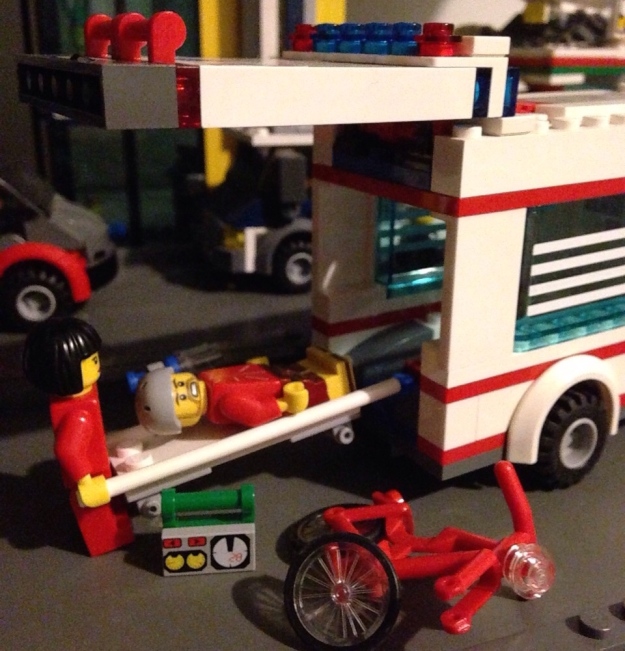 As much as I wasn’t enjoying the TT, this isn’t the view that I wanted to have on the return leg of the course… It didn’t help that my Faux Medic was also a part time rally driver, which illicited more than a few “slow the fuck down!” calls. More than a few times I thought that we may actually have a few of my fellow competitors loaded in next to me based on how close we passed them by… 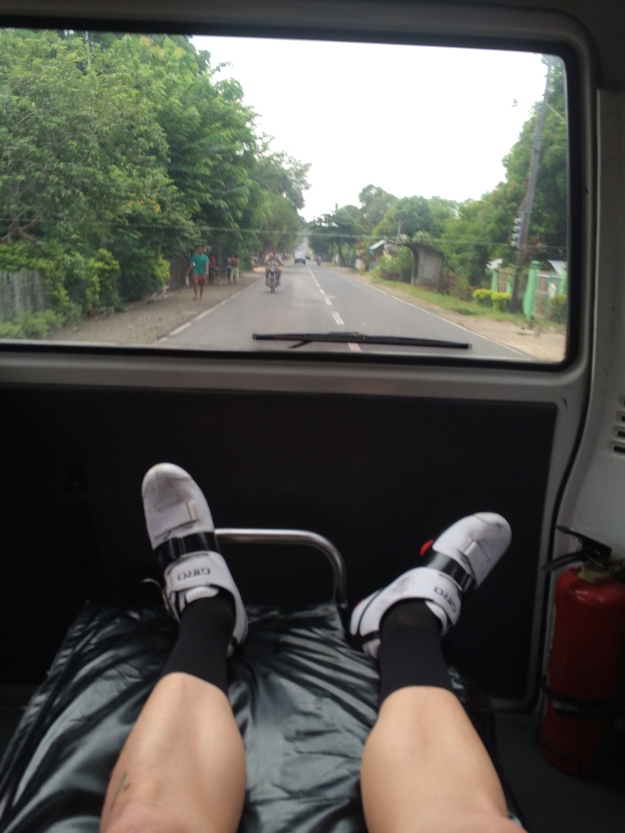 Thankfully for me, I was being taken to the ‘Western Hospital’, relief, but essentially it turned out it was a local hospital with the name ‘Western’ on the front door. Still, I won’t complain and given that Filipino’s make up 87% of the world’s medical workforce, I could have been anywhere. I had been obsessing over my Collarbone for some time, so was a little shocked when they said “Oh, wow sir, we need to X Ray your elbow!“. Fart noise x 10… Why? Oh… ok, its 5 times its normal size is probably the reason, yay.

I think that this was the moment of realisation of how fucked things were… Broken, 2014 riding over, alone and it suddenly felt a LONG way from home looking up at this view: 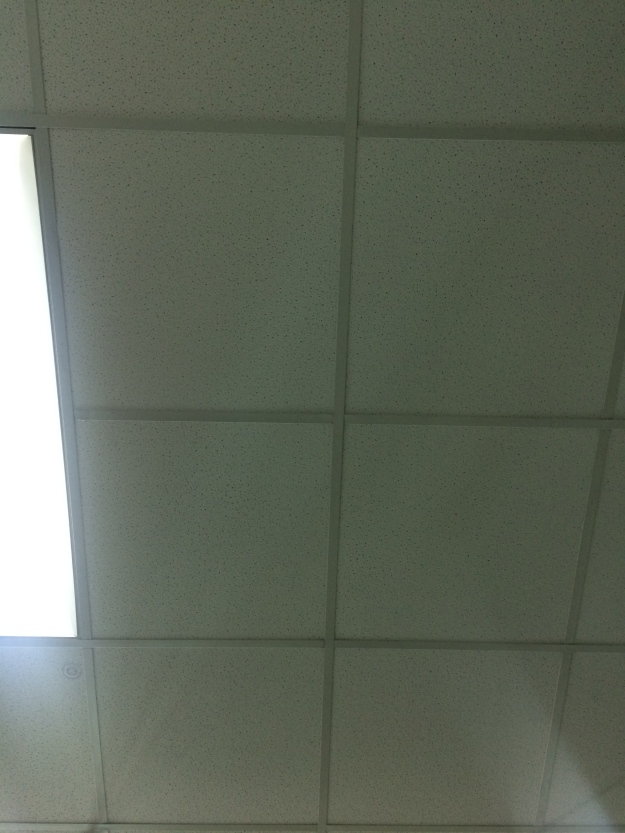 “Is this really happening?”

Only one thought was going through my head at this point: I need to get the fuck out of here. I instantly started the process and planning to get back to the Global Hub ASAP, a thought process that went into overdrive when the only doctor on site outlined that I needed surgery. Must… get… to… Airport… immobilise that shit, this is one of the few scenarios where it hurts like fuck to be put in a harness: 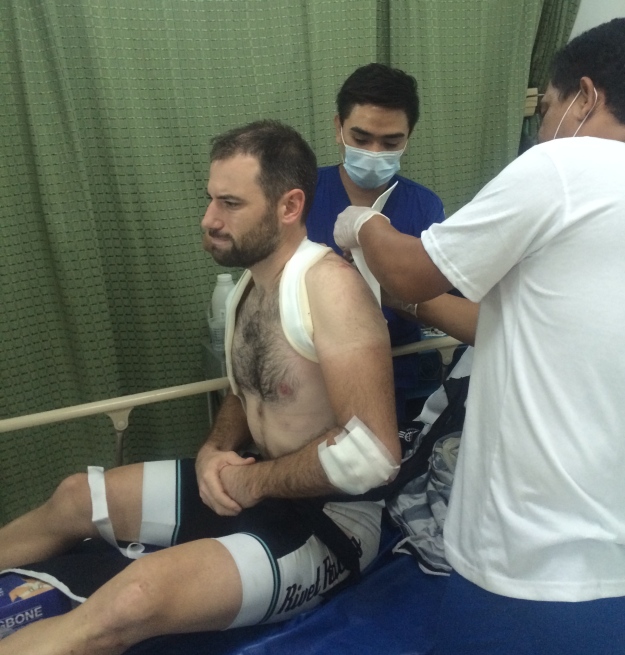 It was about this time when more ambulances arrived to unload fellow competitors, one of whom had spinal injuries and problems breathing… It was starting to look like a Syrian A&E for fucks sake. Clearly the TT course was a poor choice for a race. Eventually my Goat servant arrived on the scene, and whilst he almost passed out a few times, I managed to find some uses for him, super glamorous jobs at that:

“I only wear Roman sandals, what the fuck do I do with these things?”

Respect to the Goat though, he had hooked me way the fuck up with this rad pick up truck action! I suspect this was actually the cycling gods using this as a prop to remind me that i should have been throwing a Dakine mat on the back of one of these and hitting some shuttle runs instead. As cool as Truckosaurus was, it did little to diminish the terror of the three hour drive back to Manila, which had the constant feeling that a worse crash for the day could occur at any second: 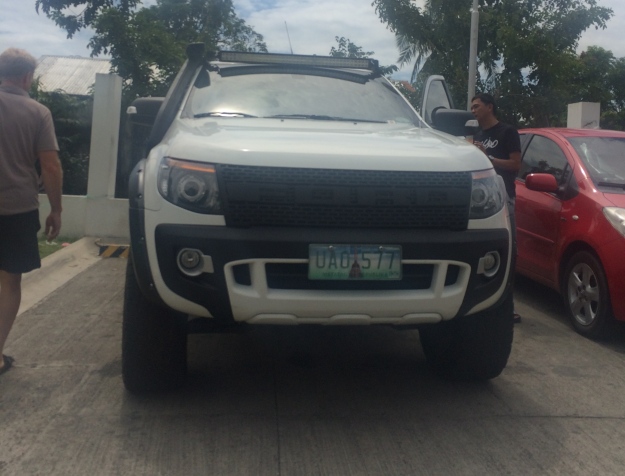 I won’t bore you all with the details on logistics, that’s coming in another post with a 12 course degustation of food for thought on racing in the Third World. I will hit you with a quick Dirty Health & Safety call – Always wear a helmet, and yes, that applies to all those cunts that think just because you’ve moved to Singapore suddenly its ok to ride around on a town bike without one. As the back of my Giro Aeon highlights here, they have an important role to play:

A massive thanks goes out to the Goat for helping me out when I was in Dire Straits and Singapore Airlines for getting  me back two hours earlier than my booked flight. Even got the full gimp treatment getting through Changi, thanks to all the people that stared at me, presume they quite liked the rivet racing kit?

Was sick of carrying my own bags any way….

I’ve worn out my dictating gimp for today, so stay tuned for a post surgery update and some perspective on why I won’t be heading to any remote locations to road race any time soon!!