As I slowly trudge through the current blogging material wasteland, getting more and more parched and starved for material as each day passes, there is at least one shining light on the horizon that allows me to put fingers to keyboard: The Dirty Demo build. That’s right, from the site that recently told you to buy less and ride more, our current focal point is the mother of all contradictions; A new bike build.

Fear not though, this build will be massively put to good use in due course. Spy shots have confirmed that the next key component has arrived and its something I have always wanted. Yes, since I was an MTB Grom (some would argue that’s still my valid status), Mavic Deemax wheels have been THE wheel set I have wanted, so I have waited until the most ridiculous time period ever to acquire them, kudos to my midlife crisis: 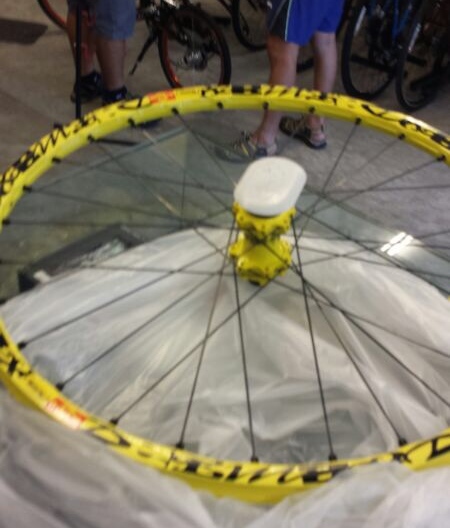 Yes, its fair to say that if I was Noah then this bike build would result in a lot of animals drowning their asses off on account of how long its taking me to get it sorted. Usually its stand over tactics to get a bike built, but this has been a chill build, not to mention a lot of global favours and random travel being clocked up to make it happen. Another cryptic shot though is starting to show that its going to be worth the wait!

The rear tire says it all…

Yes, we have gone all matchy matchy with Yellow Mavic downhill wheels to compliment my Yellow Mavic ENDURO wheels. Chalk one up for the marketing cunts at Mavic, I have vomited out common sense and doubled down on not only matching coloured wheels, but 26 inch ones none the less! No doubt I will soon be sent for re-education, brain wiping and 27.5 bar code scanning on my face.

Its getting closer to the weekend, so no doubt if you’re at work you’re ready to hit the fucking road out of the office and away from the goons. There is therefore a 98% chance you can get up from your desk/workstation/office/Barista bar and give someone this golden and very true feedback:

Yes… SO many applications for this… Use it well