First up today – There is a not so well known competition going at the moment to see who can get their photo taken in the weirdest place in the world whilst wearing their DN T Shirt. I have been super shit house at distributing the Tees, so haven’t pushed the comp hard at this stage. However, this didn’t stop the A Cat wanting to grab an early lead, rounding up the Cat Family and heading to the mainly unknown destination of Disneyland North Korea:

For the glory of the Regime!!!

Unfortunately for the Cat he didn’t realise those aren’t sacrificial virgins lined up and it also turns out that groping Mini Mouse is an offence in North K, the last we have seen of the Cat was him being dragged away by beige suited gentlemen muttering ‘Gulag’ and arguing over who gets the DN Tee before the Great Leader sees it.

Back on the Summer Tour and with the 5th day of riding in a row, it feels like we have achieved a taste of momentum, coinciding with the retreat of the death cough and a gradual expansion of lung capacity. If I was one of those ball licking people you hate in meetings at work who can never talk in a straightforward manner I would probably say: “Across all our key metrics we’re trending in a favourable direction and this upward trajectory is adding significant value to our overall operations, in line with our strategic aims and agenda”. In other words, its going sweet.

So, to keep it fresh I punched into Welly for the first proper ride in town… It originally started out as a Han Solo MTB ride in Makara Peak, the first on the Nomad Carbon, but I was surprised to get a sidekick along for the day. And not just any sidekick, a Rivet Power Ranger nonetheless: 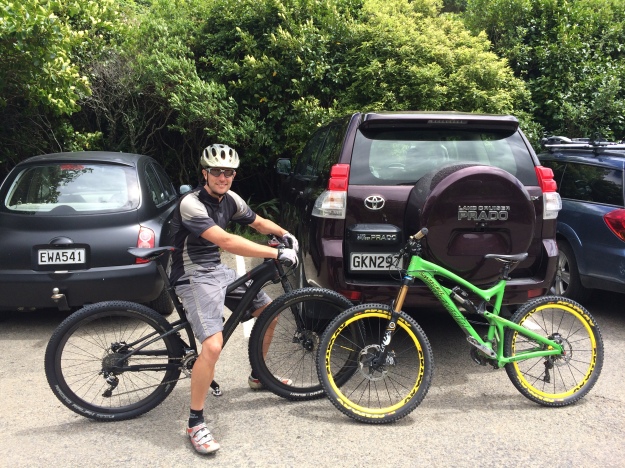 Yip, 9 months after his last MTB session in Rots as part of the DN TP Training camp, Ango couldn’t resist getting out to Makara, after all, MTB can’t be that fucking hard can it? Also, only a dog with no legs would turn down a blast on one of the greatest MTB’s ever made by a set of small Chinese hands, the Cannondale Scalpel Ultimate. Its SO hot Ango had to sit down in the above photo to avoid a journalistic incident.

Of course, had I thought about it logically, putting a skinny ultra fit roadie on the worlds best XC MTB when you have 400m to climb from the car park probably wasn’t my best laid plan…. But I was GAGGING to ride the Nomad in Makara Peak, so resigned myself to a lot of this:

Getting bitch slapped by your own bike… Strangely satisfying

The Scalpel goes uphill like it has a weird eBike engine in it, but, in the ultimate display of what goes up well doesn’t come down that well, we soon got into a rhythm of horses for courses, with the Nomad doing its thang on the way down:

“How do you ride this without a Power meter?”

To be fair to Ango we need to keep him in one piece for the Vets Tour road race next weekend, but I felt no such restrictions down Nikau, letting the Nomad do its thing while I held on and soaked it up. Pleasingly, the big beast is a LOT more fun to ride around on the rocky terrain here in Welly. I have also worked out that while we love the Mavic Enduro wheels, the tires are like jamming your feet into a couple of Jellyfish and trying to go for a run, awkward and slow. Buy the wheels, ditch the tires is our advice.

Good style… Love the kit too there AT

After a brief bike swap where I got to enjoy watching AT get into a fist fight with the Nomad trying to muscle it out of Nikau valley, it was on to Arihiti to the summit. They have groomed the absolute fuck out of this trail to the summit, I couldn’t quite believe it was the same trail. Great if you’re on a Scalpel, but like having your balls massaged by a feral cat with infected claws if your’e on a long travel bike. Case in point:

If you look hard, you may be able to spot a rampant P Ranger dropping the hammer on the ridge line…

Some time later, it was cliche summit photo expose time. First, lets celebrate the two best MTB bikes you can buy on this planet (ok, so I wouldn’t say no to a Santa Cruz Bronson at the moment). They’re very different, but both awesome in their own ways. I may be homeless and carless, but at least I have these sexy bitches:

One is big, loud and brutal. The other a ninja assassin…

It wouldn’t be a Makara post without the classic shot back across the suburb that invented conservatism. Can someone please send me the fucking memo about taking the Go Pro off my helmet for these shots?

Is that a smile or a mouth spasm?

Time was not our friend today, so it was a long rip down from the summit to the carpark via the Uber fun Northface trail… Also the recipient of a lot of love recently, it was time to let the Nomad do its thing, while I did my best to hang on. The MTB mojo is still on the rise, but there is much work to still be done, I shall double my efforts. Berm time:

Keep that outside elbow up this time you fool

Makara clearly agreed with the Nomad Carbon, with 11 Personal Records notched up on Strava, mostly on the downhills. If ever you wanted a bike to flatter you and hide your nervous over braking, then this is it.

If you’e in welly and have an MTB, then you’d be weird if you didn’t come here for a few laps… Sure, there is a lot of climbing, but its not hard to string some good loops together and its much better BANG BANG for your precious leg dollars than say, Eskdale? The Downhills also have better flow and overall the place is more big bike friendly, which is why Makara slots into a solid second place behind Rots in the Bike Park standings.

I’m a day behind in my Postage, but WHOOP WHOOP the weekend is here and all the Taxpayers can get out and ride, so stay tuned for the Saturday report.