Extreme warning – Today is a MEGA post, both in length and content, so get a coffee/beer first. Its almost longer than a bad corporate PowerPoint presso. Good Luck.

Today I was faced with a ‘dilemma’… Yes, I had two options to pick from here at Meribel HQ:

1. Stay in town and watch the first Practice sessions for the World Cup DH… Frothing!

2. Get in the Dirty Skoda and head over the Saint Bernard (yes, like the big fuck off dog) pass into Italy to La Thuile, scene of a recent ENDURO World Series round, to shred with the boys and MTB in a new country.

It was a tough call… I even consulted science, which advised: “Practice Schmactice, go and shred it cunt”. Science is never wrong, except about cows, so I went with #2 and FUCK… I am SO glad I did. For those that want a summary so they can just look at the pictures and not read this massive post (i.e. Dad), here is the word up on today:

Big call I know, and yes, I know I say that all the time, but this shit is for REAL yo. And so, with such outlandish claims being bandied about so recklessly, allow me to ram you with a gigantic combo of words and photos in an attempt to justify my position. Firstly, its worth noting that its starting to massively fill out here in Meribel, you can smell the PROness:

Come out, come out wherever you are…

Usually I wah on about the day in some form of tedious chronological order, so today to mix it up I will try something a little different as I prosecute my case of extreme radness. Here we go…

Exhbit A: The Location

La Thuile… Its pronounced ‘to-lay’, or used in a sentence as an example: “I want to lay you”. I was calling it after a swedish roof rack system, so glad I was eventually corrected. Its not far over the border from France, on the other side of a massive pass which would be fun if you were skinny and liked to climb. None of that shit here… Its not big, but its tucked in an absolutely STUNNING location. Commence foaming over scenery: 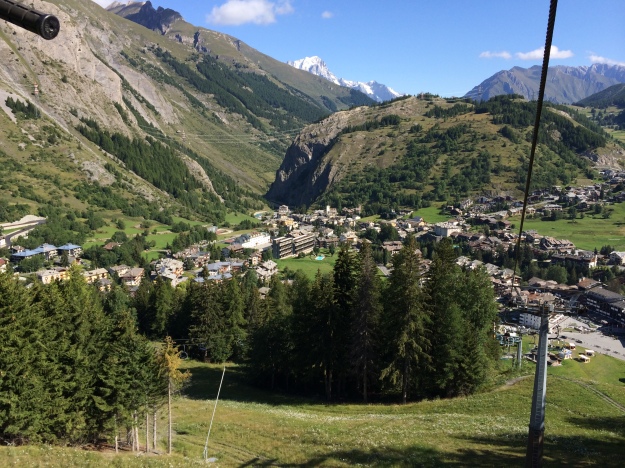 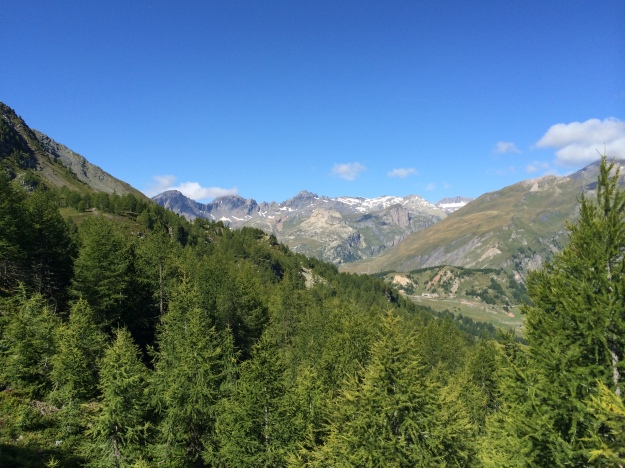 Notice how I didn’t put any glib comments or inappropriate analogies in between each photo as I usually do? That’s because this shit sells itself… Doesn’t need my literary load shooting to help with setting the scene there does it! It was a fucking freak show on the views.

Oh yes – It is a Mountain Bike Park with two chairlifts… BUT, hold up. Its not like a park as you’d expect with Whistler or Morzine etc. No, you won’t find groomed ‘Flow’ lines with machine made berms and jumps here, this is as natural as it gets, so much so that it doesn’t really appear to need a trail crew either.

I had wondered what it would be like given that it hosted an EWS round and I soon found out that Its all about tight, steep and super gnar single track, but more on that later.

Exhibit B: The Shredders

As you know, I tend to say that the people maketh the ride and today was no exception. Back on deck today was Tour Guide Mark and Spanky, and joining us for the day was UK Ex-Pat shredding crew. 6 of us in total and 5 DH bikes vs. 1 Trail bike, I would call it an ENDURO Bike, but apparently I can’t as it has 26 Inch wheels. Forget that debate, the lads were fired up to hit it and with the vista punching us in the face, how could we not be pumped to shred it? 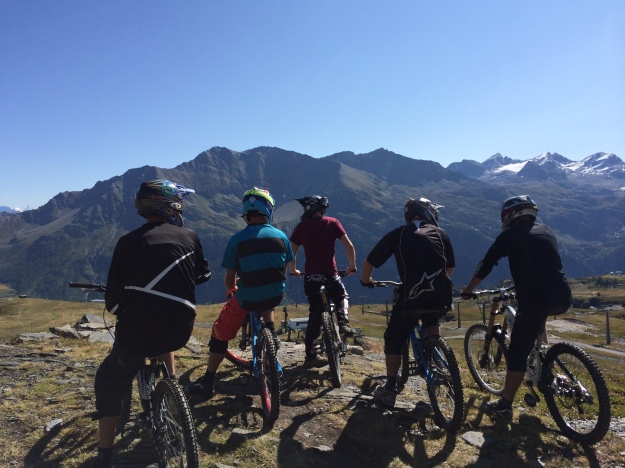 The boys line up

A rad group of dudes to ride with, they were killing it all day long and having a blast doing so, pumped to try all the trails and happy to cringe when everyone was feeling a bit fingered… These were some loooong runs, so the regroups to discuss how rad it was were imperative:

I shall admit, the trail bike was under the HAMMER today… I could have easily run the Demo here, in fact, I probably would have preferred to do so, especially when trying to follow DH bikes down some of the mega steep Black run gnar. It tended to be that halfway down I started to get thrown around on the little bike and eventually worn down. However, it was so fucking fun to ride it didn’t really matter.

Also, when riding with shredders, you can’t just say: “No thanks guys, I don’t feel like another black run, I’ll just chill here and read my book on feline husbandry”, fuck no, you have to man the fuck up on your trail bike and drop the fuck in! Yes, I rode the hardest and fastest I have ever ridden on the Nomad today, no BS… I was at the limit and it was fucking awesome, so thanks boys for putting the hammer down and a legend day out.

The bearings get another absolute hiding

See how FIRM my charge of extreme radness is so far? Well, to now deliver the killer blow, check out the on-board robot footage as I get busy with trying to express how fucking awesome the trails are. Its like the best of TP and Whistler Tech rolled into one location with a chairlift and quite long runs… How long? Bang – Another 5,000m of DH action in the bank today! How did it roll?

Check the variety… Also check out how I have lost the plot and rammed WAY too many photos in here… Mind you, could be worse, I did shoot 44 mins of video today and took 74 photos, so you’ve actually got off lightly:

Watch out for the holes, not at the skyline…

Need to get into some open high speed gnar with multiple lines? Easy…

The train leaving the station

Should we really be following the DH bikes here?

Feel that sweet tingle for some high speed narrow trail with exposure? Coming right up Mofo… 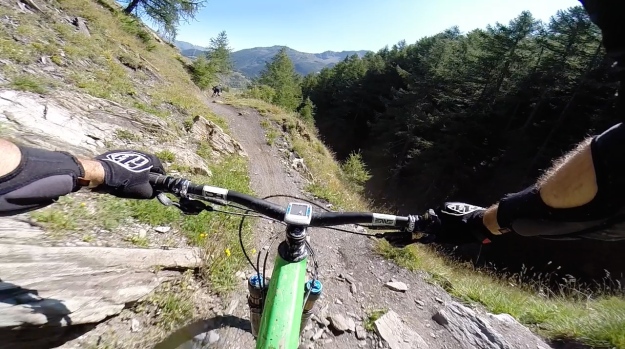 Hankering to pop out of a bowl of Pasta in an Italian village and take a selfie? Locked in…

Have that need for speed where you go so fast the bike actually feels like it may implode? Ok….

So fast I may have stopped breathing…

Got a bit nostalgic and want to relive Trans Provence? We have just the thing for you…

Or, perhaps missing that Rock slab from Whistler? Its waiting here for you Dok… 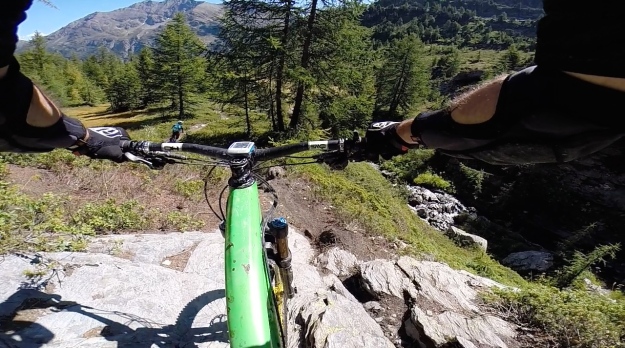 Sick of all the open stuff? Ok, I know, lets get out of the sun and into the super tight techy switch backs:

Yes, I have to turn left, right THERE

Want to smash it into a gnar field and boost off the line that takes you fart noise close to a tree? CAN DO… 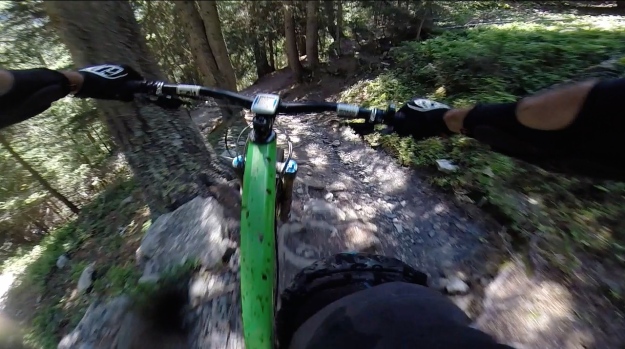 This had better work…

I’m running out of creativeness, so here’s another fucking awesome switchback littered with rocks…

Did I mention it was DRY? Like as in, the first time we have seen dust… This made it FAST, all day long: 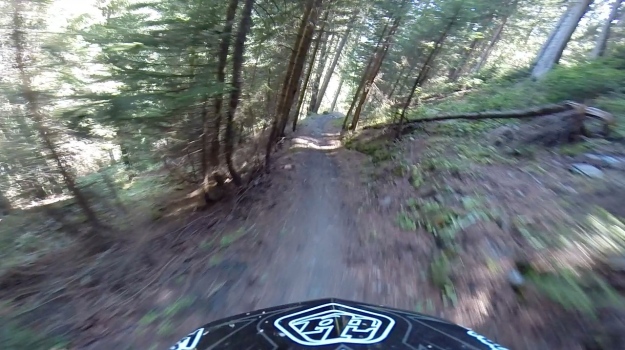 The relentless pursuit of the big bikes

It was hard to find footage that did the trails justice, but this one sort of does… Its not steep enough though, the REAL steep stuff later on I didn’t get as my Go PRO had died…

Tell Lord Vader I have them…

Spanky makes his escape out of another tight gnar corner…

Slipperier than an eel coated in massage oil

We all agreed we have NO fucking idea how they raced this in the EWS, we rode a number of the stages and FUUUUCK they were hard, like mental hard and I would say its the hardest riding I have ever done on a trail bike. Its so fast, steep, multiple line options and it does on and on, just awesome shit. Goes to show how good the EWS riders are, massive respect:

We are so fucking Enduro right now

Exhibit D: The other stuff

Yip… I’m still fucking raving on… This should be 3 posts, not one, but I am too pumped to stop the moistness. Yes, there is additional anecdotal evidence as to why La Thuile is super rad. If you like to battle with gnar and you’re in Italy, whats on the menu for lunch? Fucking YES it is:

Cue roadies vomiting in their mouths

Spanky also continued to give us a tutorial on how to fuck rental bikes, today’s class was how to find the only screw in the park and ruin a perfectly good minion:

Totally screwed… Fuck, that is a lousy caption, it must be midnight AGAIN

QUICK – Gratuitous DIRTY Nomad shot, soaking up another day of not having to be peddled up hill:

And how about this? Under the first lift a cafe pumping out Euro techno tunes and people getting busy in the pool. I was riding too fast to notice any Italian Bikinis: 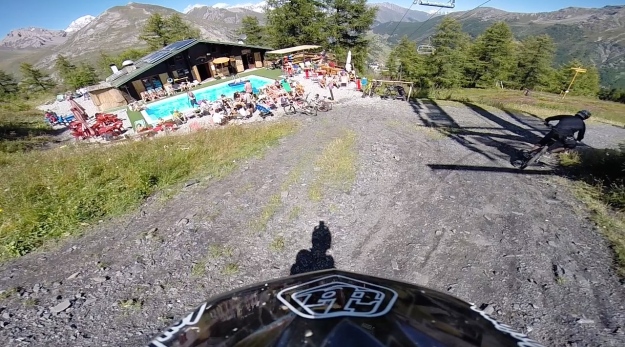 Fuck… Almost there… And finally, fucking finally to prove my point, even the drive home was amazing! Check this out as a drive and what you get to see. I was SO pumped I even stopped, parked up and went for a weirdo tramp off piste to scope out the view:

View on the French side also #notbad:

#Dirtytraveltip – Google maps also doesn’t have every round about mapped in France, resulting is some rerouting, to a place where I wondered if A) I was going to end up in a gimp suit and B) if I was about to wedge the Dirty Skoda firmly in here:

Actually had to get out and check…

Phew. There we have it. The Dirty prosecution RESTS. My only advice:

You may be able to discern that I am beyond pumped, but it was one of those days… Where you are so stoked that its hard to be cool about it. Just one of those days where its super rad to be riding a bike in the mountains. Life is GOOD.

Meanwhile, back in Meribel…

How do you cap off an epic day like this? Hit some quick dusk stalking of course… I didn’t score unfortunately, I saw Sik Mik, but he escaped before I could nail a photo with him. Instead, I creepily hung out at the Santa Cruz tent and watched Dougie the super mech sorting out Ratboy’s bike for tomorrow, after it was fastest in practice today, gold: 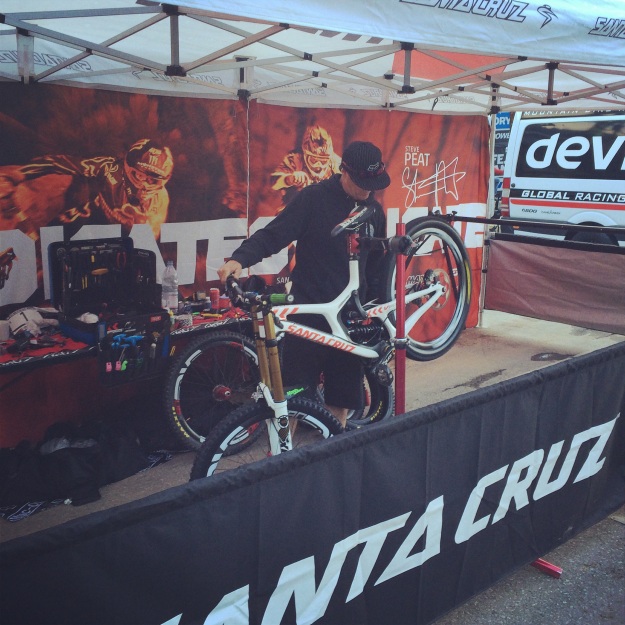 Just go about your work… Don’t mind me…

Biggest truck, trailer and tent award goes to? Yip, these guys… Must be all the spares they have to cart around, more than a few pairs of Boxxers being rebuilt when I crept past:

Must remember the white paint and brush…

After 13,000m of descending in 3 days, tomorrow is a rest day, by rest day I mean climb a mountain to watch the World Cup DH Qualifying. Yes, everyone hates me. I am sleeping easy.

Well done if you got this far down and thanks for reading!