I knew at the start of the day that the Stelvio was going to be a challenge… I love my climbs, but as I sit down in Prato at the base of the hardest climb I have ever done, I am starting to reconsider the amount of passion I direct towards leg blasting mountain passes.

Yes, I am fast forwarding a bit here, but I am too rooted to think about structure to be honest… I’ve ridden Alpe d’Huez, Galibier and the Big Maddy and I can sit here and confirm that I think the Stelvio beats all of them in terms of destruction and hardness. Sure, I would have liked to have been more prepared, but I am not sure it would have made a huge amount of difference today to be honest.

We got up early and bailed on Trento to head the 1.5 hours to Prato… the surprise to us about an hour into the trip was that the villages and towns we were driving through had become strangely germanic in nature… Yes, still in Italy, but things were getting freaky German pretty quick, which suited me as I got to use my Faux German accent frequently and conduct Commando war comic reenactments, bonus. Here we are cruising Italian styles towards real mountains:

Both Clarso and I were in wonder of the amazing scenery and mountains, but we really wished the Doktor was here to tell us how mountains worked… In the end after an hour of debate, google searches and diagrams we decided that it must have had something to do with a glacier. We were both stoked that ‘how shit works’ isn’t that hard after all.

Here is the profile of what awaited us on the Stelvio, ignore the lovely looking downslope, it was all about the first half:

Can’t be that hard can it?

The plan – As hard bastards, we set out to climb both sides, the classic/famous side from Prato first, down the other side to Bormio for lunch, before returning back up the Stelvio and down to Prato… which would have been around 50km’s of climbing… Not just any climbing, but seriously top shelf mythical world famous as seen in the MF Giro climbing… Not to be sniffed at.

We had about 1km warm up from the hotel before it started… What lay ahead was 25km’s at around 7.8% or so, with about 1800m of climbing to get through on the first side alone, yikes. It took me about 3km’s to realise that it was going to be a difficult ask.

I used to think I was a climber… Well, that I was good at climbs… I like(d) climbs that’s for sure, and I am sure I used to be better at it. However, when you ride with someone that can climb properly (Clarso), they naturally have a 2 to 3kph speed differential at cruising speed. As such, I was like a porky yo yo (at 75kg’s a climber is well within their rights to label me as cuddly and I was feeling it) behind him for the first 10km’s or so as we sweated our way up the beast of the Stelvio with its 48 switchbacks!

Get your horse prancing

Of course, it wouldn’t be an Italian pass without a few horses prancing by, you can hear them coming a few switchbacks earlier and being a narrow road, you get to see them carving up the mountain, due to the power of Go Pro (or lack of power as it ran out of battery again), here are a few examples:

The Stelvio reared up almost in honour of the pair of horses and kicked in some 14% sections and a healthy dose of switch backs. I actually felt ok in the middle section of the torture session and was able to maintain some rhythm that wasn’t completely embarrassing. Things were looking up.

With 10km’s to go it was time for Clarso to be set free to fly my pretty, he set off at a pace that instantly made me realise just how slow he had been riding to stay with me, its a bit like when you realise that a parent has let you win something because they want to boost your ego, but it can have the opposite effect. Within 2km’s the lights were going out and I was coming apart at the seams like a Tauntaun with a light sabre in its rib cage… I jammed in bars and gels, but there was no avoiding the harsh reality, I was empty.

Legs like concrete blocks, wet with sweat and suffering like a possum with its nuts in a Gin trap, I kept trying to grind on in the face of the Stelvio’s relentlessness… with 7km’s to go, I was doing, ta da, 7kph… Don’t even do the math, I didn’t want to when I looked up and saw how far there was to go (I tried to put a picture in, but the shit wifi keeps crashing out).

I really started to crack… and zig zag and try and work out how to get to the top. The last 3 days and my sub par overall road riding form had come to head, which was now being slapped across my face. I thought about stopping and taking a quick break… No, can’t stop… must keep going… Get out of the saddle… one pedal stroke after another. Ok, maybe just a 30 second break to catch my breath before the last 5kms to the top. No… don’t do it… this is awful, we don’t ride like this, ever… I hope no one can see this. Ok, just stop for a moment and take a photo.

So, I did… I stopped, broken by the Stelvio… At least no one was here to see me thank fuck and I can just not mention it. Phew… Wait… someone is coming down… Fast… oh, fuck, its not is it? Oh man, quick, clip back in! Too late: 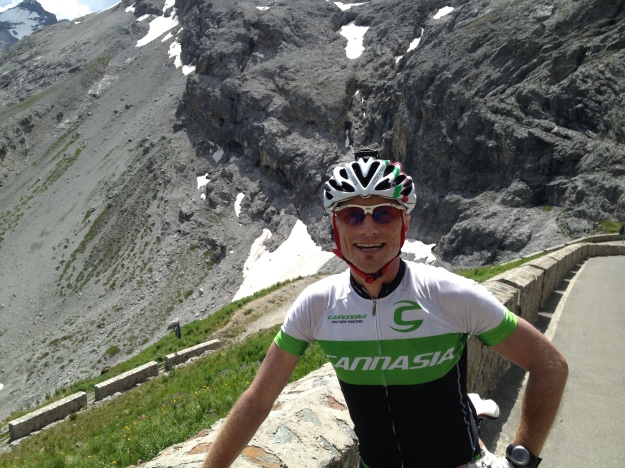 “I could smell the stench of surrender from the summit”

Busted… Total defeat… But, at least now I had a team mate to encourage me to the summit, and, the photo I got from my road side stop was worth it: 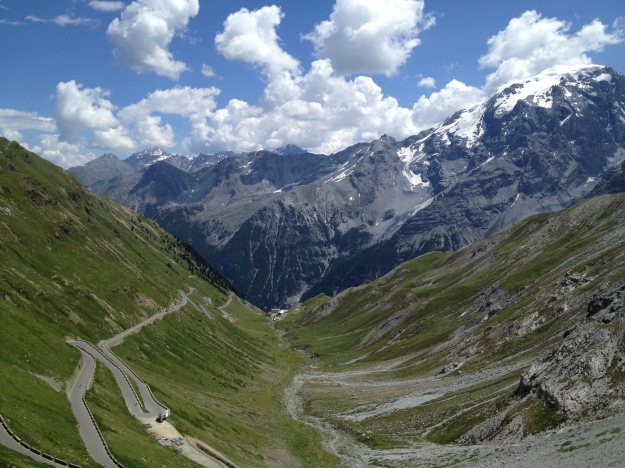 I’m not sure if it was the last gel or the glowing embarrassment of being busted taking a pussy break, but the last push to the summit wasn’t as bad as the previous 5km’s, I was extremely pleased to see the top, 25km’s of climbing taking me an awful 2 hours 15 mins, hang my head in shame. Still, from a sense of achievement perspective I had ticked off the Stelvio!

With the weather starting to close in and it quite obvious I was broken, we made the sensible call to drink as much coke as we could afford and descend back down to Prato and the warm embrace of the hotel (which has the shittest Wifi of the trip so far, my OCD is raging). A good call to, as descending the Stelvio is extremely hard and fast, not to mention narrow and as doc would put it, “rammed with c*nts”, making it an interesting prospect. Especially when it started to rain with a few km’s to go, not fun. Always good to have a change in plans validated, as we both agreed being caught trying to climb the other side or descend in the rain from the top would have been a horror show. (I did have photos from the summit, but the wifi has defeated those ambitions, so shall try again tomorrow.)

Main tips – Turn up to ride the Stelvio fresh, preferably with good form and some big climbs under your belt. Stay away in shit weather and hit it early to avoid the crowds as its feral. Do it from the Prato side for full historical impact and you will soon understand how insanely hard it must have been for Ryder H to save his Giro in the last 5km’s of this beast of a Col.

So, we are hanging out in Prato tonight and finding it very confusing… Its Italy, but its not really… Everyone here speaks German and it feels a lot more organised and well maintained, so we can’t quite work out if its Germany, Switzerland or Italy. We asked around and it seems the locals don’t really know either, quite strange. I hadn’t expected a German leg to the holiday.

Tomorrow – Well… Er, hmmmm… The ‘plan’ is we are going to do the Mortirolo, which Lance Armstrong described as the hardest climb he had ever ridden. Sure, he is a lying crazy man, but he had taken enough EPO to kill a horse, so if he reckons its hard it must be tricky. Its 12km’s with an average gradient of 11%… Hmmmm… I am not even going to think about it and I have ignored Clarso’s comment: “Lets go for a time tomorrow on the Mortirolo huh?!”… Yes, I will be going for a shit time! My plan is to get a head start this time…