Rumours of my conversion to full time road riding have been greatly exaggerated, but its indeed true its been the longest period between Dirty literature posting ever, I think. Its therefore time to get back to Dirty business for 2016, hopefully bring some fresh content and continue to blur the lines between an internet site and just a really long Instagram post.

Originally I was supposed to be in Rotorua shredding up a storm and putting in some quality pumice miles on the Nomad to prepare for a raft of ENDURO races and then the EWS rounds to come, alas the whole broken neck scenario had put a burnt sausage in the starfish of those plans, with the MTB remaining on lock down until Feb. So for now, its more Road fetish action… Squeeze into that race tight action and off we go.

Its no secret as to what has kept me off the air for the last few weeks, a life event of a different kind; getting married… Yes, there is a girl out there that reads these posts and still wanted to get married, which is clearly a case study that anything is possible in this world.

Of course, this meant that someone was left with the unenviable task of arranging that western tradition of bringing a group of dudes together to engaging in drunken antics which usually seem to be laced with some form of weird lists, a stripper that smells like cottage cheese grinding on you as people now post it to un-social media in real time and if you’re unlucky, some form of being dressed in a toga or gimp suit and everyone engaging in some form of homoerotica wrestling. Watch now as anyone who went to a private school nods fondly… Yes, the Stag night!

I’m not huge on convention, so my only input was: Fuck that… I preferred it if things were kept Dirty, but to a different vibe. Think along the lines of Mr Clooney hanging out at his place in Como. My ability to consume large amounts of craft beer appears to be trending in line with my abilities on the DH Bike, which is to say I’m likely to fire truck early and have to go home before the action really starts. Plus, my OCD planning spreadsheet didn’t allow for losing half a day as firemen cut me out of a tree while I was dressed in a Japanese school girl uniform.

So, as an ode to the occasion, AT decided to get me the one thing that I didn’t have: My own Dirty PRO Conti Road team: 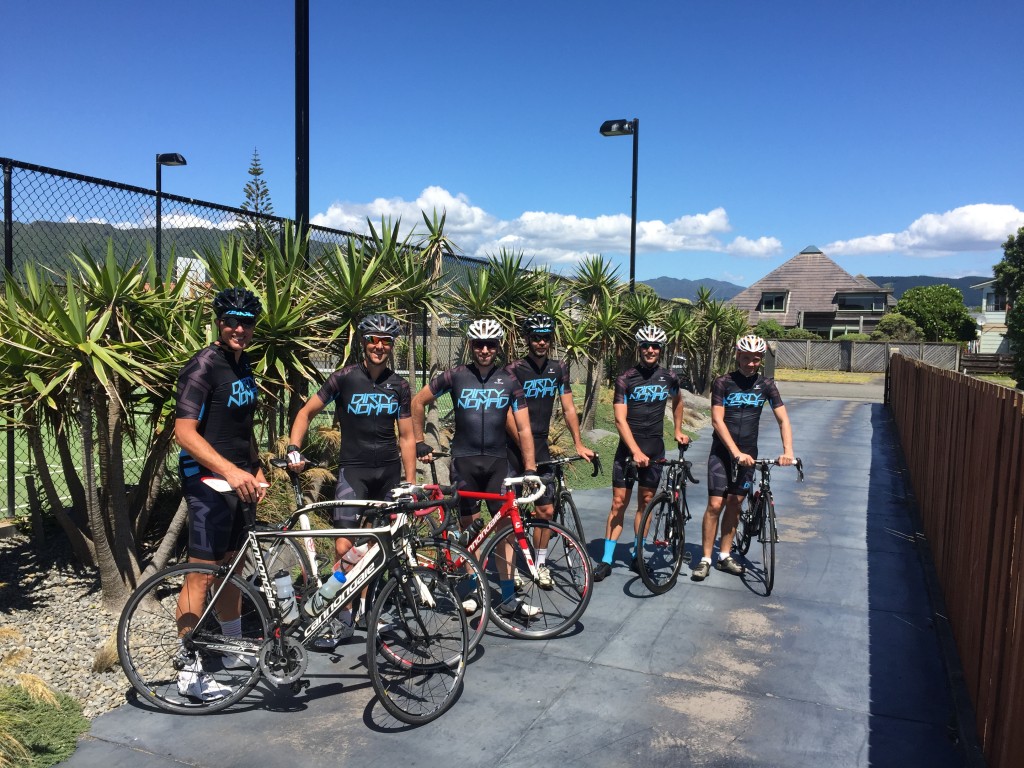 Given that I have been blacklisted by every stripper in the greater Wellington region, a tip of the hat to my fabulous Corporate hedonistic days where we were like a mobile ATM for lap dancing girls called ‘Candy’ or ‘Alabama’, AT had to resort to designing a ride course that would at least in spirit provide some linkage to a normal Stag do. Nailed it: 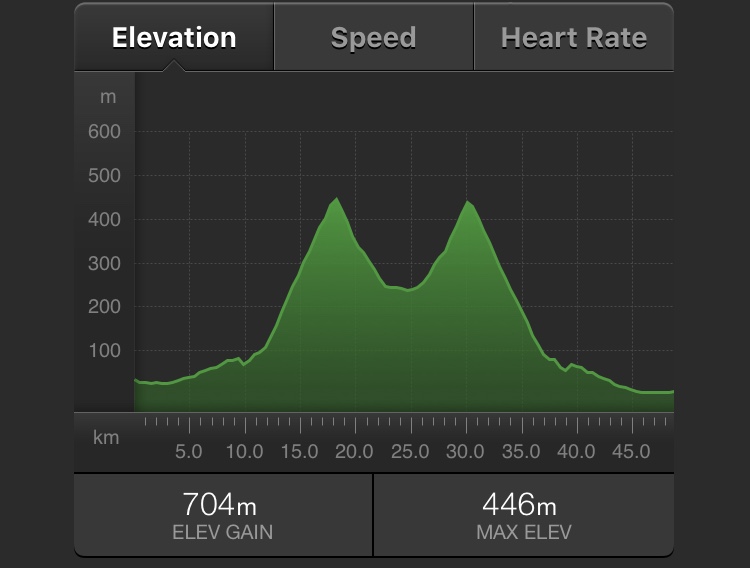 Just the setting to make you KOM

And so it was ON… The Panther, AT, Alley Cat, Spanky and… Craig. A squad of 6 cruising out to enjoy perhaps some of the best riding in all of Wellington and my personal favourite: The Aka’s. In line with the Festy 500 action, the weather was absolutely on point. 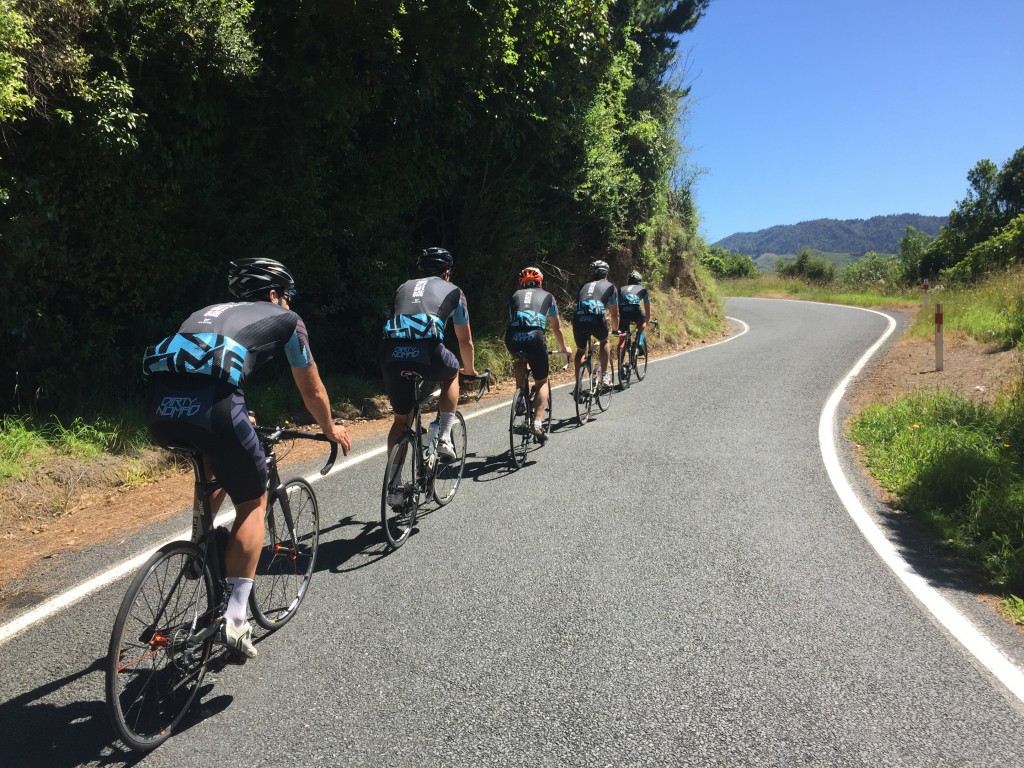 I suddenly realise, much to my horror, that the Sock memo was still in the drafts folder

Whilst MTB followers may feel a little queasy at these images, I have to say that seeing 6 rad cunts rolling up this classic of climbs clad in race tight Dirty kit invoked quite a bit of stoke. Cycling gets much applause due to the variety in different ways it can bring awesomeness into your life, and this vibe was as cool as ripping into a piece of single track or riding a lift up to start a DH run.

Well, you know, sort of – I was at threshold straight away and then ended up spending both side of the climb trying to hold wheels as AT set a, I quote, “Easy spin pace“. The lower slopes engendering some silent patches here and there. 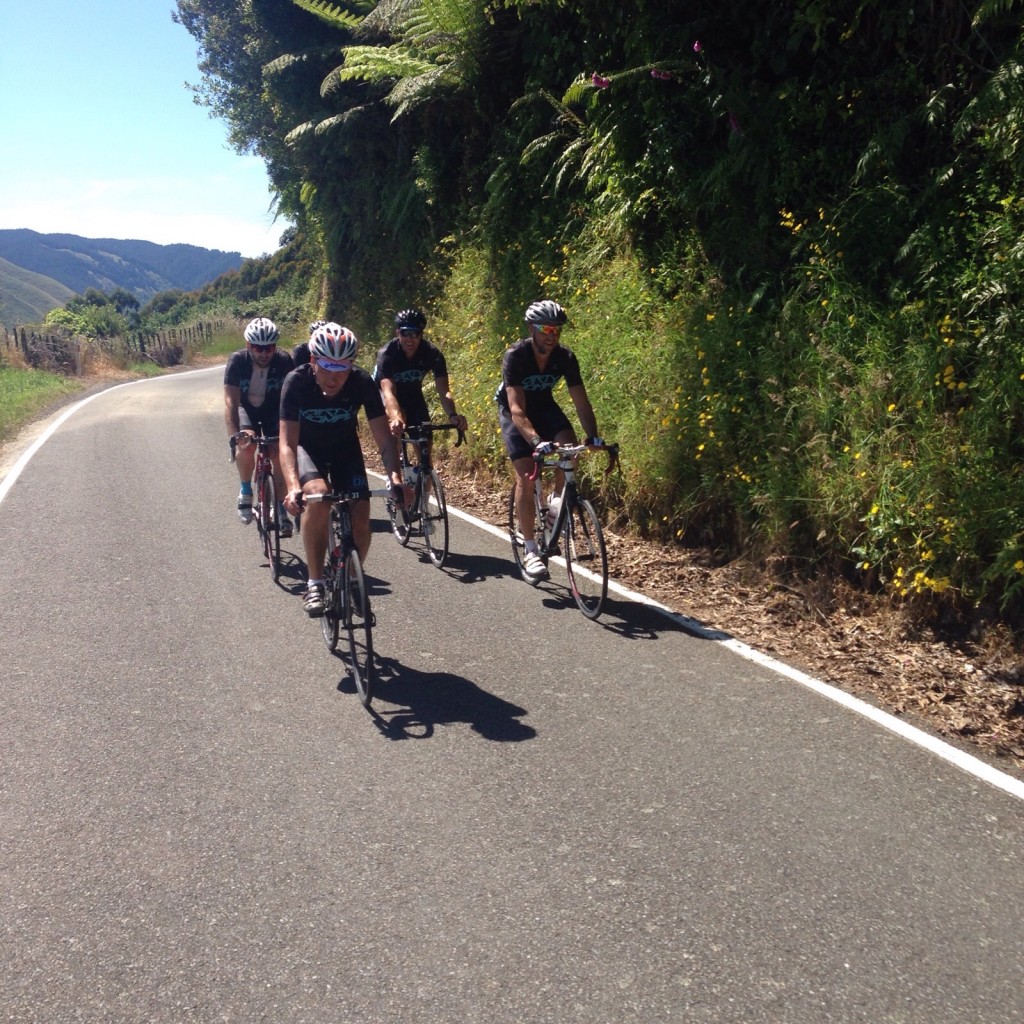 On the left, those under the siege… On the right, smiling high performance athletes

Front of the group there is one of the more enigmatic members of the DN Global Collective, Spanky… Like an MF ghost, some may recall him popping up on the radar like a malfunctioning Stealth Fighter in 2014 to rip me and the French Alps up on any hire bike that nervous bike shops would give him. I can’t recall the last time I had a road sesh with the spankster (15 years?), but it quickly had that good old days vibe about it.

Also in that camp? Craig, a seriously old school soldier from the Genesis days rolling in Lismore forest, so fucking long ago that I can’t even locate photographic evidence of it! I’m talking 1994-1997 vintage action here… It was golden to be rolling with these guys again in the 2016 set up. 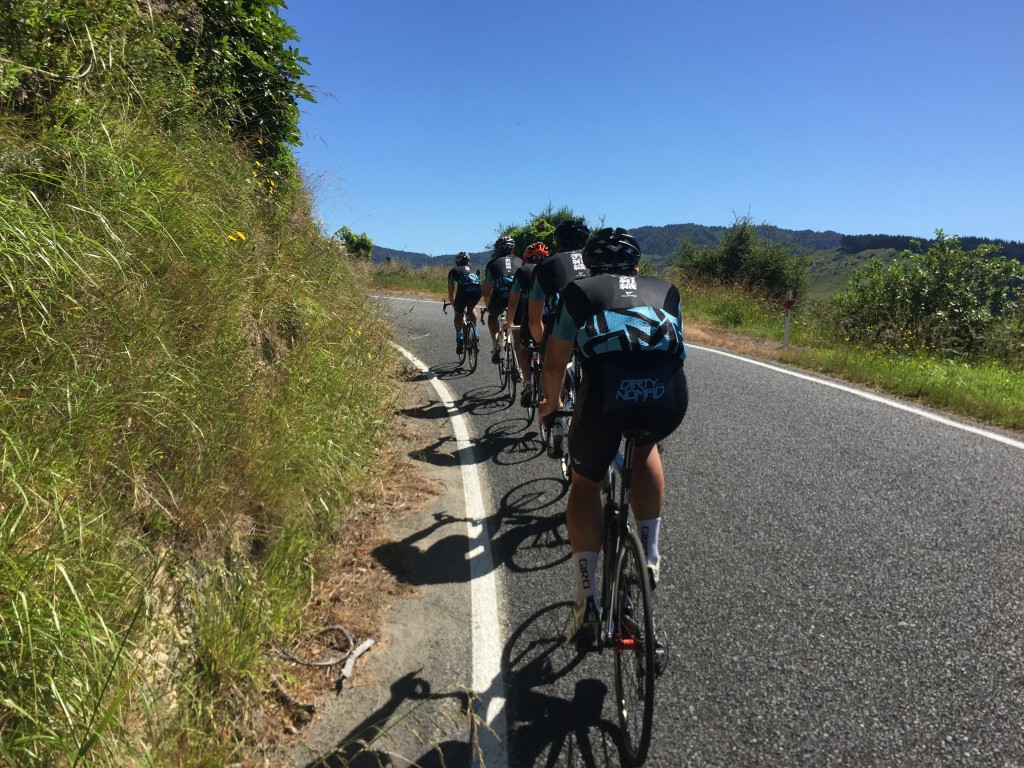 The pace stayed toastie, the temp was rising and I was busy taking a giant dump on my brand ambassador credentials whilst simultaneously  keeping committed to my position that its NEVER too hot for a Rapha base layer. Yes… There’s always one cunt… 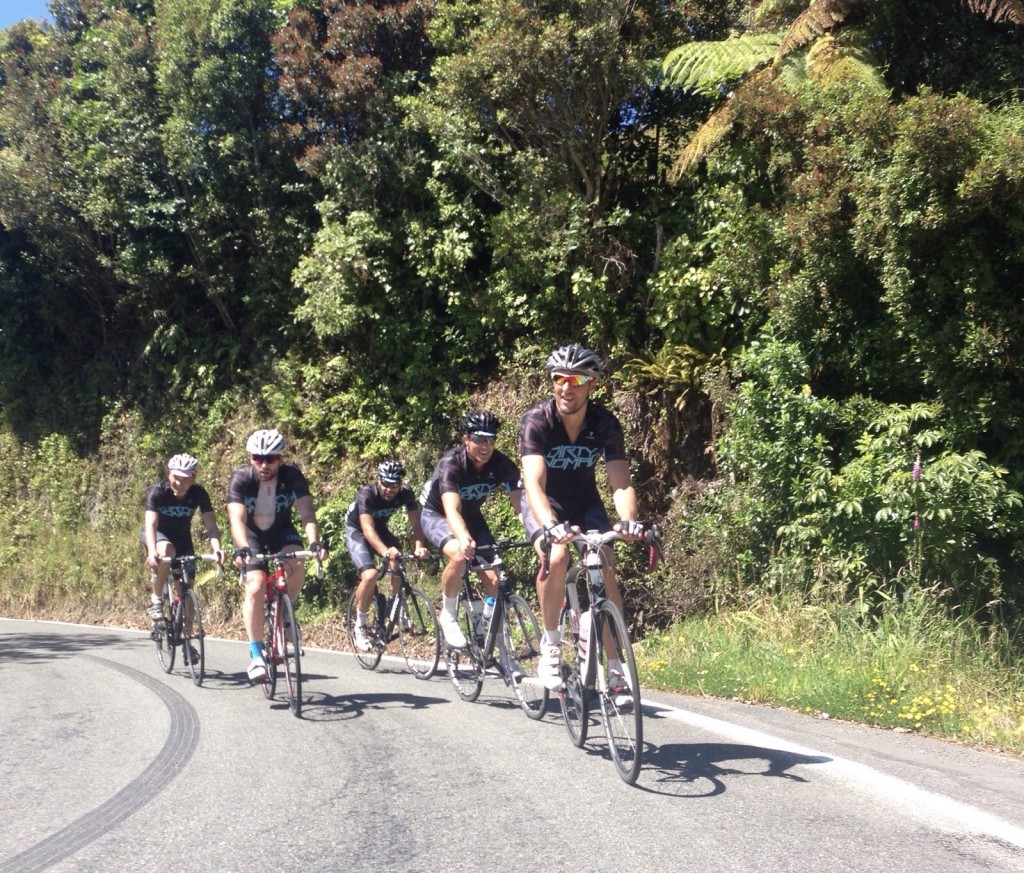 I’m not sure if it was old school nostalgia or my sworn duty, but I started to fully reminisce about the bygone era of Aka’s missions which 100% of the time culminating in me launching an ill timed suicide attack against the Lizard, usually 4 or 5 corners earlier than what my firepower could sustain. In every case this rebellion was ruthlessly crushed with Imperial efficiency. It was therefore my duty to keep tradition alive, even if I was at threshold HR and probably 8kg’s heavier than those semi glory days.

Much to the horror of Merckx and the Lizard, I was gifted the summit on the harder Waikanae side, in spite of the melted tar doing its best to drag me into the ever waiting pit of mediocrity and history. To celebrate we all stood around waiting for Tiff Cromwell to turn up for the strip show (A win all round when that failed to materialise) and so that local bogans could drive past and refer to us as cigarettes. 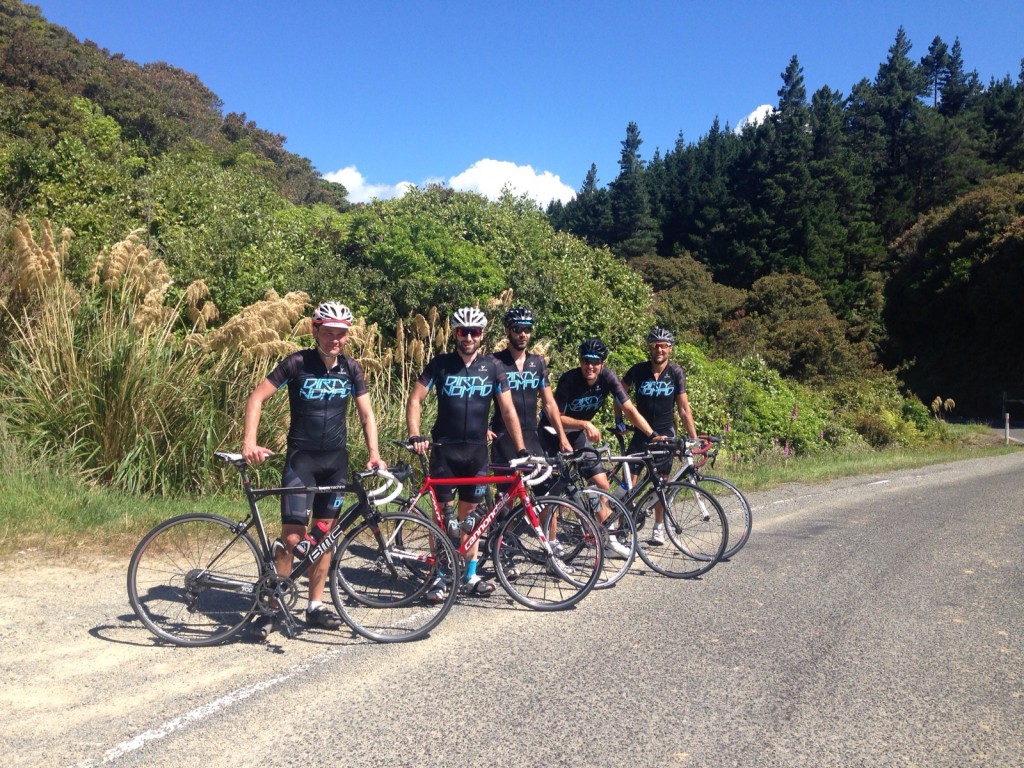 For those that enquired: I’m almost through the second trimester

We then surrendered to the most obvious gag when on a Stag ride around these parts (granted, this possibly the first one ever)… Which turned out to be basically the best gag Spanky had been involved with all year. 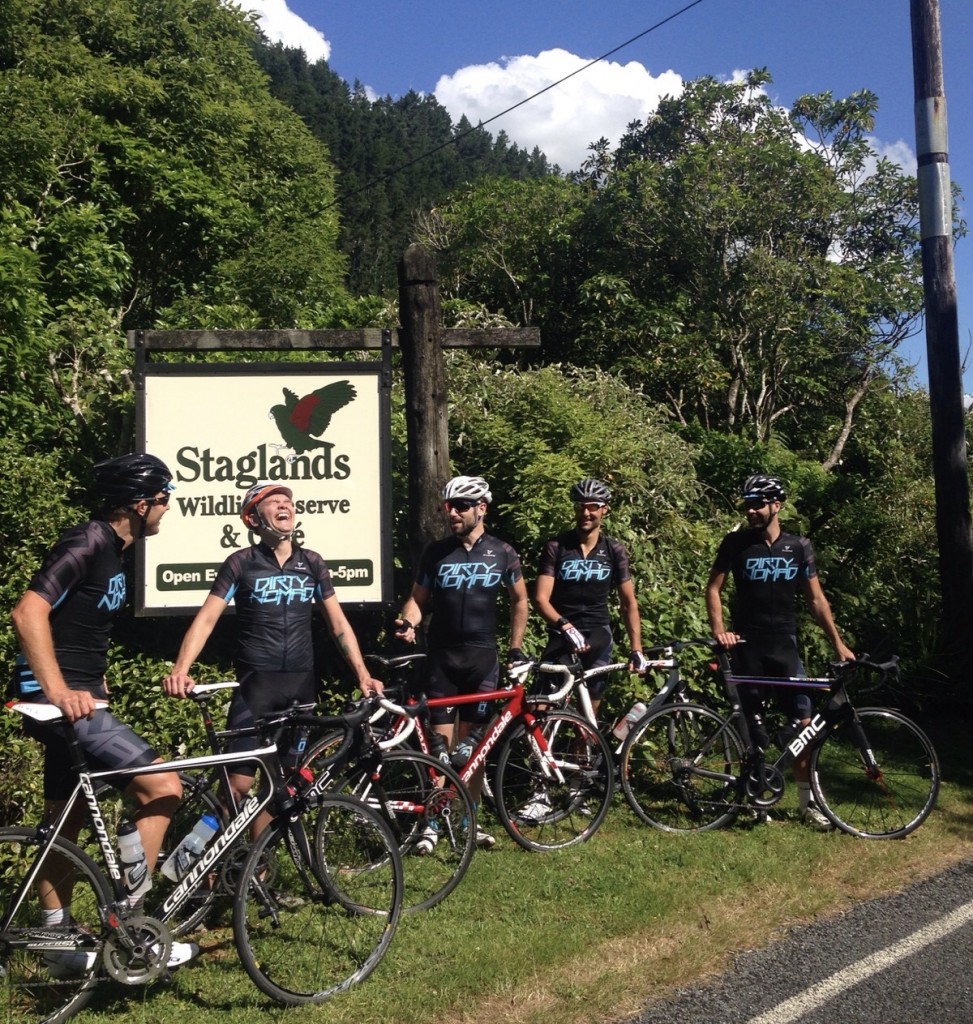 The punch line comes ashore on Spanky Island like a tsunami

Much like the most disliked cunt on any group ride, I sucked wheel harder than any stripper AT could find in the North Island before repeating my telegraphed attacking tactics at the last possible moment. Again, I was showered with gifts, the upside being I was marginally in the right place to snap a few more summit pics, because lets face it, we were in desperate shortage of photos… 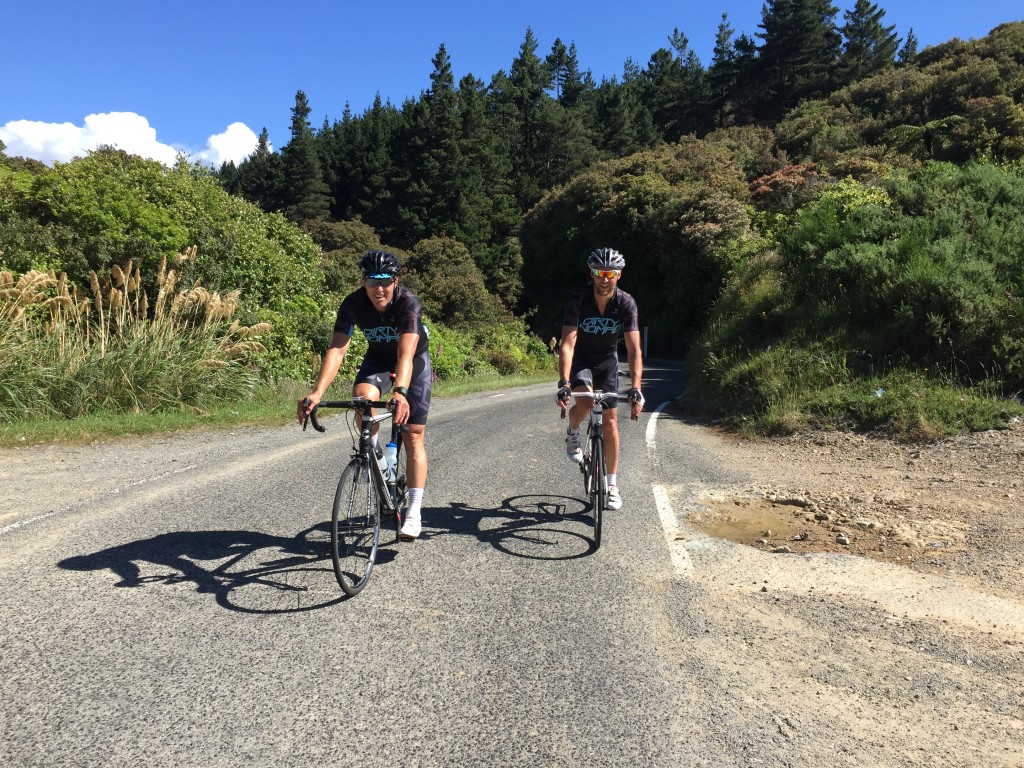 A traditional Stag do would have most likely mandated beers at the top of the Aka’s, but a quick scan of the variables resulted in common sense winning the day: My alcohol tolerance (or lack thereof), recent broken neck and the fact its a descent that requires a LOT of focus. But a #iwantitsobadtobepro Coke was totally legit. 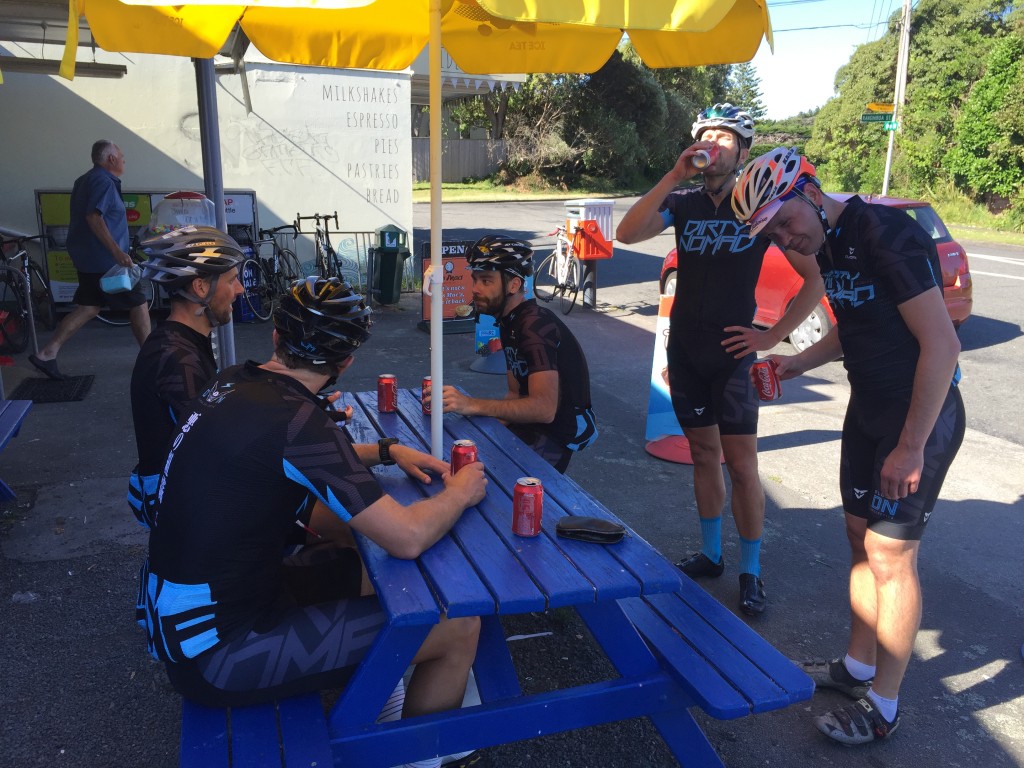 Whilst safety was on everyones mind pre wedding, its quite possible there was some heavy attacking antics on the run back into Waikanae… I can’t confirm who the protagonists were, or if ALL the lane was used at times but its fair to say the return leg home was substantially faster than the outbound trip.

Before you lose your shit, don’t worry, the aftermatch events resulted in enough craft beer and pizza being consumed that I spent the following day shitting like a German Sheppard with anxiety issues. Still no sign of Tiff Cromwell. Thank fuck. 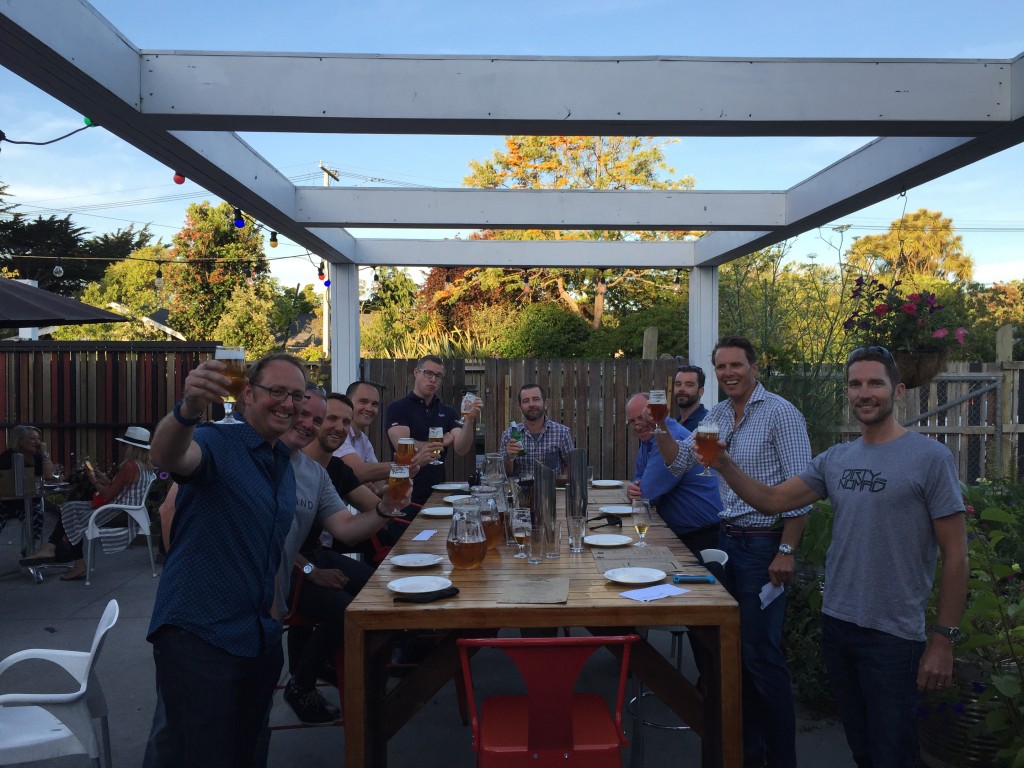 The only jugs on display all night

If you’ve read a few Dirty posts you’ll probably know I’m well versed in soap box rants that wank on about how awesome cycling is when you roll with good cunts. Well, this event was a case study in just that whole concept… So pass me my ladder and prepare the soap, in the non-spartacus way.

Sure, it would have been extra awesome to have a few DNGC’s who were noticeably absent along for the day, but getting out to ride your favourite climbs with awesome dudes who happen to be rolling the same kit (cough, OCD, cough) pushed the day solidly into the legend category. It hadn’t occured to me until this point, but perhaps one of the best parts of weddings, aside from getting new towels, is that its an excuse to bring everyone together to indulge in fuuuucking good times.

I was utterly stoked to have a great ride with a rad group of mates, in what ended up being a rare and unplanned recipe of awesomeness. (yes, my inner narcissist was just stoked that we had 6 mofos representing in the DN Road kit)

Unless your crew is all based in the same location, it can be challenging these days to assemble legends from over the years. Life works hard to keep everyone under the pump and when geographically dispersed we have to revert poorly to catching up on either some eMessage type arrangement or Gram gazing. Its was an unrequited reminder that rolling with like minded units is one of the greatest gifts of cycling.

Thanks to the whole team for making it a golden day out and for not tying me to a tree at the Aka’s summit so Possums/anyone from the Rapha Canyon squad could chew on my balls all night.