In the fever of a crazy end to 2015, and the ensuing rabid start to 16, a rather niche but exceedingly important awards ceremony was overlooked. Possibly the only awards likely to cause more controversy than the Oscar nominations process, but one that we are duty bound to insult your eyes with. Yes, back for another year:

Just when you thought I may be toning down the delivery of Cluster C Bombs, these are the awards that will carpet bomb social convention, scare of potential advertisers (who were probably drunk anyway) and leave Cyclingcocktips followers so distressed they’ll want to wrap a Rapha Lombardia silk scarf around their neck, and listen to coldplay on their Rapha head phones while wondering why is the world such a horrible place?! To be fair, if you feel as repulsed by the C word as much as you do about everyday household cleaning products, then today is not really your day.

But forget those cunts, they’re just minor players in the wider universe of cuntery and as you’ll see, 2015 was a pretty vintage year for those of us that specialise in Cuntology. Yes, you only need to get a glimpse of the Trump-Palin cuntgolmerate in your Twitter feed to realise that being an utter cunt whilst still thinking you’re completely normal is SO hot right now.

But lets keep this politics free and focused on the cycling world… As much as we love our sport, alas we are not immune to the infection of cunts and indeed, they found their way in here and there last year and no, not just German XC Bandits either. Without further aspersion casting, here are the nominations for the Dirty 2015 COTY Awards!

Its pretty obvious I’m a massive Shimano fan (#XTRstiffy), except for when they’re running people over that is… Or when I’m waiting for their neutral support to get back from lunch for my third brake bleed.

However, I’m pretty sure that Jesse Sergent (left) and Sebastien Chavanel were quick to unleash a rather pointed “You cuuuuuunt” when they were both run down by the Shimano neutral ‘support’ Skoda during the Tour of Flanders: I’m not sure what cunt is in French, but suspect it was said loudly by both Seb and the whole FDJ car when they were rear ended by the same offender that took care of Jesse’s collarbone. #Eurocunt.

Holy fuck, this thing is such a cunt its hard to know where to start. Rumour has it that Lil Kim ordered the development of an H Bomb in North Korea specifically to take out the factory responsible for hatching this Frankenbike. This is what happens when a company that makes office furniture reads cycling internet forums and decides to try and create a new category of riding. “Hi, I’m a solution, have you guys seen any problems around here?”

Its like an Enduro bike, an XC bike and a CX bike got drunk and gang banged a Road bike… 9 months later out comes… Well, we still don’t really know what it is, but if you did happen to pay over $4k USD for ‘it’, then sleep easy in the knowledge that you’ve done a fine job announcing to the world that you’re a cunt with a capital C. Charge up the Flamethrower kids, daddy’s got work to do

Cannondale Engineers even managed to time travel back to 1994 to find purple anodised cranks and hubs to complete the job. It filled me with joy recently when I got to watch the one Cam Wurf was riding implode to the point where it ended up in the car, whilst being ridden for its ‘intended purpose’ – Which I assume is to do nothing well.*

3. The Medical car at Tour of Romandie

There seems to be a common theme here… And this one is pretty open and shut. Or, open at the wrong time. Holy fuck, of ALL people to be taken out by, the medics?!

4. Crashing (and its consequences)

Crashing can totally get fucked… Yes, its a fact of life when you choose riding bikes as your passion, but the utter cunt is when you don’t spring back up off the deck and keep pedalling… And there was a bit of that going down in 2015: Yes, breaking bones, generally getting fucked up AND not being able to ride your bike: Total cunt. It wasn’t just amateurs getting fucked up though, no… As ENDURO bikes get faster and courses get radder, its we the humans that end up being the weakest link… Unless you have a Reverb and Enve M70 rims on your bike.

Check out the BIG names that had some time on the sidelines in 2015 thanks to shithouse injuries: Leov, Sir Grubby and Oton. More talent in there than a new years party at the Playboy mansion.

Lets face it, wouldn’t be a COTY without him would it? In here as he’s basically a Hall of Famer in the cunt stakes. BTW – Still waiting for that Olympic Gold medal back Brah. Also, small matter of losing count of how many Astana riders got pinged for juice in 2015… Plus there was that whole holding onto the car debacle. As they say: “Attitude reflect leadership“. Ding ding, here comes the cuntmobile.

Fuck off: Plus size Mountain Bikes

Yes, 2015 saw the hatching of the next parasite to infect the cycling eco-system and continue with the dumbing down of everything. I’m looking at you 27.5+, you epic cunt. Balls deep in the meat grinder of mediocrity were of course Specialized and Scott, attempting to use marketing, gimmicks and by flying people to cool locations to get them to agree that riding an awkward tractor is the future. Hmmmm… A future of fatness, where have I seen that before? “My Box is super swatty”

Thank fuck then we have media maestros like Seb Kemp to keep shit real and not surrender mindlessly to the hype of 2.8 or bigger MTB tires. Yes, dumbing down is as hot right now as ‘inventing’ new riding categories that were always there (you can ride a road bike on gravel?! Holy fuck! Wait… Tour de France 1903?), or annualised hub and BB standards, so expect this marketing driven phenomenon to keep getting fatter, not unlike the consumers lining up for these cuntwagons.

7. The fuckbag standing in the middle of the road in Paris

I would ask “What the fuck was he protesting about?“, but then realised that absolutely no one would actually give a fuck… Nor could it possibly be important enough to make a gigantic cunt out of yourself like this: 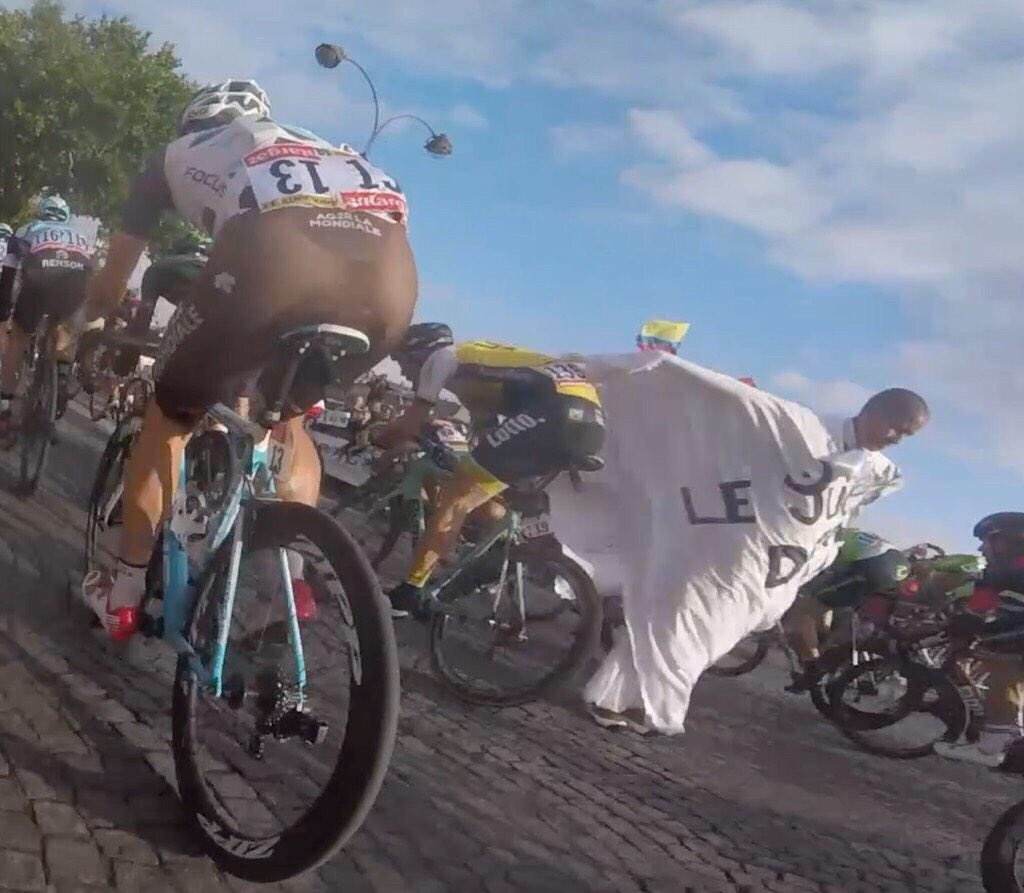 If only Mr Merckx was still in the Peloton…

Please, by all means continue to dress up like a cheap ass Casper the ghost and do weird shit, just in a mine field which is guarded by starving crocodiles with shit attitudes.

8. The Sagan take down

Starting to notice a common theme here in the 2015 awards? This one the worst by far however… Sagan is one rad cunt and possibly the best thing to happen to the collective personality of road cycling in a long time, thank fuck we have him as World Champ this year. SO… given his status as a King amongst cycling men, you stay right the fuck away from him when you’re buzzing about on a Moto.

Alas, when he was looking good for another Vuelta stage win and quicker than you can say Grease lightening, it was all over… Cunt.

The Trek boys giggle at the inevitable Rim Tape jokes

So then… What did 2015 tell us about cunts? Aside from the fact that they’re very much alive and well? A few things:

As I like to say, Cuntery is in the eye of the beholder, so picking a winner from this lot is best left to the individual. Clearly I’m giving the nod to getting injured, but there is plenty in here for everyone.

Most importantly, keep up the battle in 2016 against the hordes of cunts lurking out there waiting to overuse emoji’s or lie about their average speed. Best form of defence is to ignore them whilst insulting yourself with Good Cunts. Here’s to winning the battle!