I’ve been pulled up by a few people recently and asked what I’m raving on about with all this ENDURO business. ENDURO that, ENDURO this… I even got asked if I had transacted on a Motorbike. Like a weird IT nerd at work that you just want to punch in the face when they answer basic questions with a whole bunch of tech BS, It hadn’t occured to me that perhaps this eLoad shooting required a little bit of elaborating on. Well then, allow me to retort… Yes, I’ve previously ranted on about ENDURO here and here and then did a giant big dirty gushy load shoot about it right HERE all over the show. But, then I realised that I didn’t really do a good job explaining what it actually is. I’ve spent the past few months trying to outline to people how it rolls as they frown at me and ultimately, come to the same conclusion, saying out loud:

“So, its just like a normal mountain bike ride then?”

YES! Well… Yes and no… First of all, its not often you look like this when you go for a normal MTB ride: Yes, that would be Sir Grubby, 2014 ENDURO World Series Champion, getting busy going about winning another world series race in some exotic and awesome location, i.e. La Thuile etc. Right then, time to explain myself. If I was really lazy, I would just copy and paste what Wikipedia says….

“Enduro is a form of Mountain bike racing in which there is a greater proportion of downhill sections, which are timed, to uphill and cross country sections. This aims to test rider’s technical bike handling skills as well as providing endurance and climbing.

According to the Enduro World Series 2014 Rule Book, a minimum of four special stages is required per event, a minimum of three different courses must be used, and the results will be calculated by adding all stage times together for each rider.

Enduro differs from XC cross-country cycling racing (which historically has more emphasis on cardiovascular fitness and less emphasis on technical ability) and pure downhill cycling racing formats, which may contain little to no climbing or cross country skills.

Enduro’s ‘All Mountain’ discipline therefore favours riders with a breadth of skill, on multi discipline cycles; lightweight XC bikes may lack sufficient suspension travel for fast downhill control, whilst full DH bikes may not allow a rider to climb the uphill sections.”

Woah, call the NERD police man… Whilst that’s all technically correct, there is a far cooler way to get the gist of what ENDURO is all about, head over and download the movie “The Rise of Enduro“, or if you’re a tight ass, then watch this teaser below. Note when ENDURO hero-slash-legend Grubby is quoted as saying:

“To me its the most natural form of Mountain Bike racing…”

And yes, he WOULD fucking know given he’s won pretty much any type of serious MTB race you can throw an ENDURO bum bag at:

At the other end of the spectrum, neither is it a Downhill race, where you now need capabilities and balls beyond the reach of most riders. Gone are the days of being able to ride any National level DH track, with them now littered with gaps, drops, doubles and a whole range of stuff that wants to maim you as quickly as possible. The result of DH courses ramping up the starfish tightening factor? There is a whole army of ex-DH racers roaming the lands like Ronin looking for a new race series master to serve.

So… If these two disciplines got together and smashed out a baby, with the dominant DNA coming from the DH Daddy (its a forgone conclusion that XC is biting the pillow here), then 9 months later, out pops, you guessed it:

How this plays out on race day is pretty straightforward. You rock up to the event, to an atmosphere significant less uptight than most may be used to and with your crew (this is all about the people), you head off to race over 4 to 5 stages (assuming its a one day event). If its the REAL deal, chances are you haven’t ridden the course before, making it all the more exciting, but most likely there has been some practice going down.

And here’s the winner in most peoples’s eyes – The stages you’re timed on are predominantly downhill, perhaps the odd little up here and there, but pretty much DH action. Not the “I want to break your face” type DH scenario, but more than enough to make things highly rad, like the trails experienced in Perth.

At the end of each stage, you then regroup with your crew, as riders are spaced out by 30 seconds or so through the timed stage, and then you sift/cruise to the next stage start. Of course along the way you’re discussing your various levels of radness, or if you’re riding like you had dog shit for brekkie, then that’s the time to confess to allow all your friends to call you a cunt or outlined to you how microscopically small your anatomy is. As such, its very much like your normal Saturday ride, except with a competitive element built in… Assuming the timing system doesn’t shit itself. Goes without saying that overall combined stage times from the day determine your final placings, much like a car rally. Except without cars.

Ah HA! Suddenly starting to see why all those riders on the fringes of DH and XC, which FYI is a fucking big group, are now loving the Big E format so much? Perhaps that’s why these things are selling out faster than a bribed politician/FIFA member. I did a big skite about the Rotorua round of the EWS selling out in 2 minutes, well, the Scotland round had 600 spots and it sold out in 30 fucking seconds… Now, who wants an Irony Biscuit? Well, key to remember that this is the format that the UCI (World Cycling Governing body) said it wasn’t really interested in being part of… Nice one cuntbags!

EWS? I hear you question. Essentially the pinnacle of the format is the ENDURO World series, which takes in 8 rounds in 2015, across the globe… Well, across a whole lot of places you’d love to go to and no real shit holes, even more appeal. Quit your job and go full time ENDURO now, assuming you can get an entry. Melt that fucking internet man: More ENDURO goodness than you can shake a wolf at

Keep an eye out for round one coming to your screens at the end of March where we will get another dose of Dirty Nomad vs the PRO’s… As some may recall from Meribel, this didn’t work out so well when I last tried it, but surely now I do Yoga I’m gonna nail it.

Outside of the World Series, there are a number of other events globally popping up, some of which may or may not be in an upcoming DN Mission. The most well known outside of the EWS is of course Trans Provence, TICK, that’s locked right the fuck in (yes, flights booked), so that’s probably why come Chinese New Year this shall be formally changed from the year of the Goat to the Year of ENDURO. Not everyone is impressed… So, in some sort of loose summary: If you’re a Mountain Biker and like the idea of racing your bike, but don’t feel like the XC banditry lactic spewfest, or the anatomy shrivelling terror of most modern DH tracks, then get yourself a set of kneepads and get along to the next ENDURO event you manage to get an entry into… Just make sure that you have ENDURO specific gloves and friends of course: Finally, whilst encompassing the ‘Spirit of ENDURO’, this may be a completely different thing, but we salute its intentions never the less: 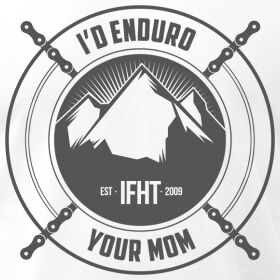 Of course I haven’t touched on all the gear one needs to be full ENDURO, but thought that was best left to another post… Watch this space, I know right, more exciting than a generic copy & paste coaching plan!