Note – This post is a recap of the Trans Provence Tour in June 2013, not a real time update!

Well, day 3 was always going to be hard to beat given that I had pronounced it the ‘Best day ever’, but we wanted to give it a fucking good crack. The day started off in usual pattern… Firstly Dok unleashed a massive depth bomb in the toilet and rendered it unserviceable (to be fair, this is my first toilet joke/reference of these reports) and we all took the time to marvel at his handiwork… He really is the Andy Worhol of toilet destruction.

Following on from this it was the usual game of ‘Wait for the Wolf‘, as he is either borrowing my shit again or generally existing in the state you see here: 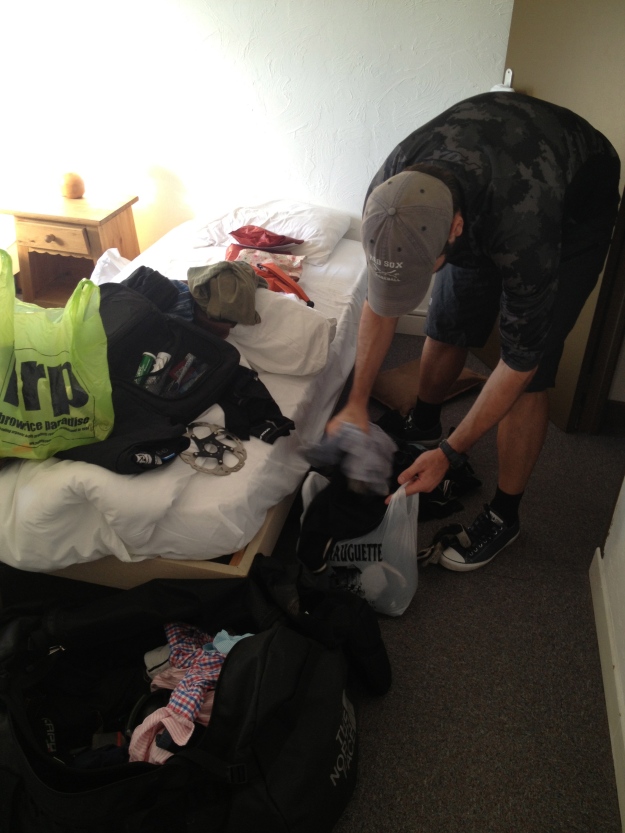 First time away from home can be tough… “You mean I have to pack my own bag? WTF”

But not to be uncharitable to the wolf, who really cares about waiting when this is the view out the window turned on by Valberg?

If I was French, I would be super arrogant… Its awesome

BOOM – Yes, it was going to be a fucking good day sports fans… Starting at 1800m we had no idea that today would be a ‘different’ kind of day, I don’t want to give away the whole plot, but suffice to say that if Day 3 was the MTB equivalent to having a bubble bath with Peta Todd and Kate Upton, today eventually had more of a prison shower feel to it.

We started out with a nice gradual spin from the hotel, up to the first DH of the day… Almost within minutes we had the first two ‘COTD’ awards:

So we wound our way up and the down a little bit on a fun DH before arriving at the first ‘Special stage’ of the day, our first major DH. The briefing was that the top section was nice and relatively easy, with it getting more hardcore at the bottom… No problem, data loaded in and good to go for the first ripping session of the day. I was first off behind the guide and we picked up speed pretty fast, criss crossing (jump jump) some off camber grassy terrain at decent pace.

And then it happened… I felt the back go, no problem, I can get that back my brain alerted me, but at the same moment it also realised that the terrain was dropping away and I was now both jack knifing and losing balance backwards at speed, then the Nomad obliged me with digging in the back wheel, massively high siding me over the top and down the bank… Rolling repeatedly like a rally car until coming to a heap. I escaped uninjured, but quite humbled… Yesterday I had bitch slapped Provence and it didn’t take long to slap back. Here it is in full GO PRO glory, including the chase shot from Herr Doktor (along with all the other TP crashes):

From the bottom of the DH we had a road spin up to the summit for the next DH, here we are at the top, Dok and I pleased that we finally got to have a photo under a summit sign without Timmy there claiming yet another KOM, this one is for you Welsh Assassin:

From here we ripped another forest descent, having to stop along the way for the first flat tire of the day (this is the start of a theme). Rip it up Das Wolfenstein: 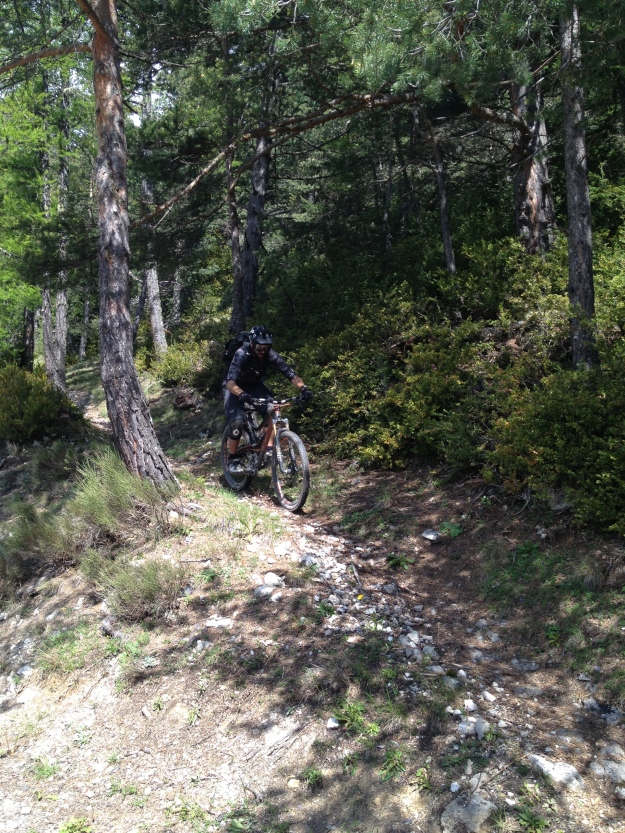 One of the last runs for the Tallboy Carbon….

Here we have Dok and Wolf chilling, Dok refuelling old skool styles with the Evian wank water and wolf posing like a Mountain Bike Magazine model (better yet, the BOSS is on patrol in the back ground, she has taken quite a shining to the wolf after they had brekkie together again for the second day in a row… Apparently she likes his rug):

“Doc, my balls are so big I am having trouble sitting down….”

This DH led us down to the most amazing mountain side village: Roubion!… my shit iPhone photos don’t really do it justice, but this little place was quite amazing, as you can see below… 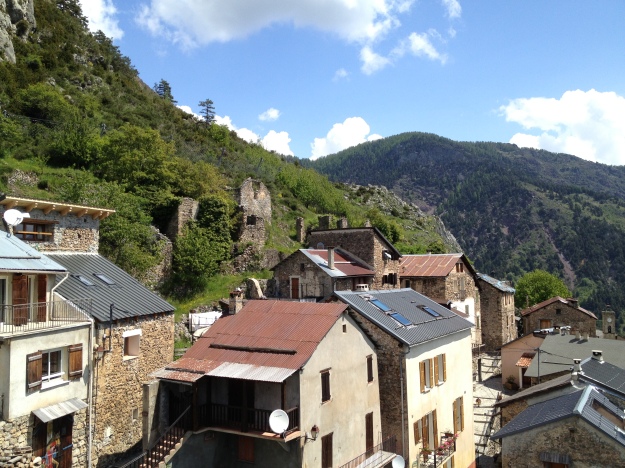 A big day in town…

I like this photo as we have finally shrunk doc down to be the same size as us, it take a bit of getting used to, but has improved his centre of gravity no end (we also look like Spec Ops operators, which is RAD):

“So, this is what its like to be little”

It was while we were eating lunch (and I was watching video footage of my crash whilst secretly eating awesome French bread so I could fart the room to pieces later that night) that the Dok’s laser eye spotted an anomaly… Maybe he felt a disturbance in the force? Maybe he heard something with his scientist ears? Who knows, but he did manage to locate something that struck terror into all group members who were riding carbon fibre bikes.

Now, I will preface the next pic by saying as a Santa Cruz fanboy I find this extremely hard to document, initially I wanted to have a cover up and deny this ever happened, a Santa Cruz Omertà if you will, but in the interests of transparency, here it is in its full glory, a photo of the CRACK in Das Wolf’s brand new Santa Cruz Tallboy LTC (I still blame the airline to this day):

So there it is, Provence had claimed one steed… A massively depressing moment for the wolf, but he took it extremely well (Dok and I both agreed that we would have had a massive tantrum). Not to miss the action, the wolf was back on after lunch on one of the guides bikes, a 26 inch machine (welcome home wolf) with brakes around the wrong way (for him), so it was a mindfuck for him for the rest of the day.

One of our favourite Euro’s is an Austrian beast that we have named ‘War Machine‘, an epic 6 foot 2 old school shred machine that also happens to be an engineer… I loved his Austrian accent, but he also wanted to have a crack at repairing the fucked up Tallboy, here he is inspecting the damage and working through a fix (to the war machine, anything can be fixed or bent back into shape with a hammer or by locking it in a dungeon to teach it a lesson): 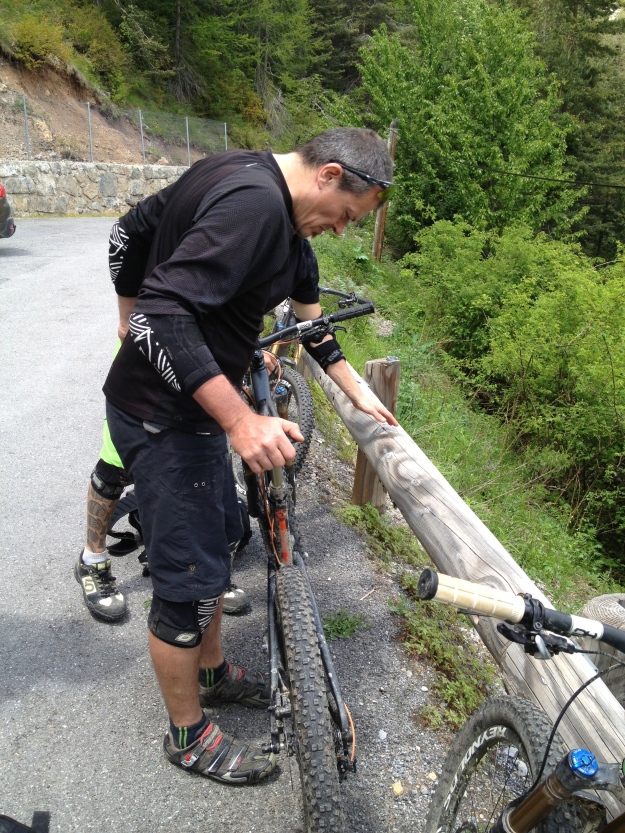 “Ja, is no problem, I can make splint yes? Are you ok if I melt part of this frame?”

To give you a feel for War Machine’s approach to MTB, here is his Beast of War bike, basically built from shot down aircraft from WW2 and welded together somewhere in the Austrian Alps:

Whilst on the topic of bikes, here are some tips for bikes NOT to buy:

After lunch we had a cool DH and then an epic portage across what is best described as a landslide on Mars, I have wanked on about ‘Portage’ for a few days now, so here are some pics to give you a feel for what this means – The below shots were part of an epic portage and transitional section that included scaling slips and dodgy exposed climbing single track, very hard work (did I mention wolf’s loaner bike had a 1 x 10 set up? Epic burn):

Smiling because its like being back in the gym wasting tin… 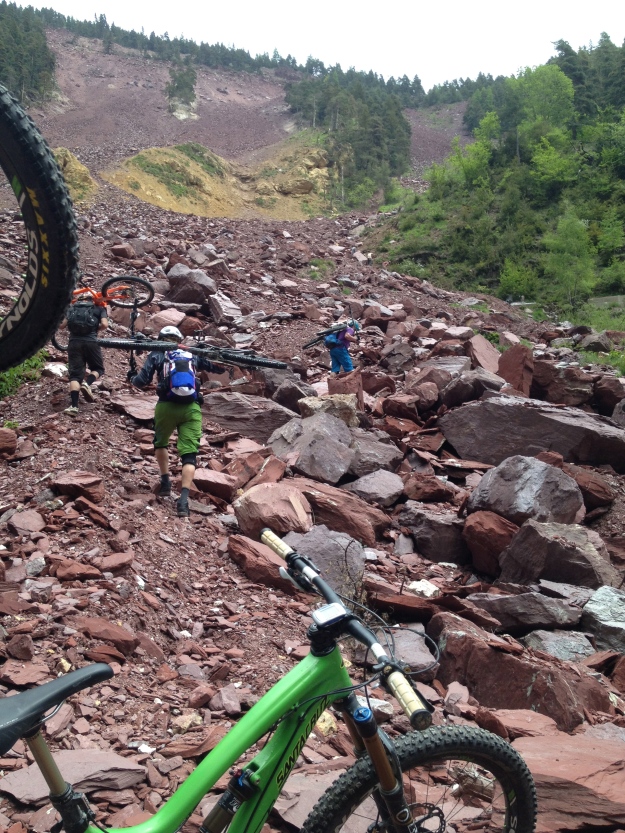 We then started to cop a little afternoon rain, not so useful on rock and wet grass, it made the whole thing as slippery as a prom date and I got a little excited on a high speed section, suffering another major tank slapper moment (as shown in the above video crash footage), however this time I managed to recover it and avoid certain disaster, so a good save. Into the final looooong and epic DH of the day and it was Detroit Flat Tire city… First the Dok flatted out… Then upon restart the shit Commencal 29er popped… Finally that was repaired and we were about to set off to find that Das Wolfman had a rear flat: 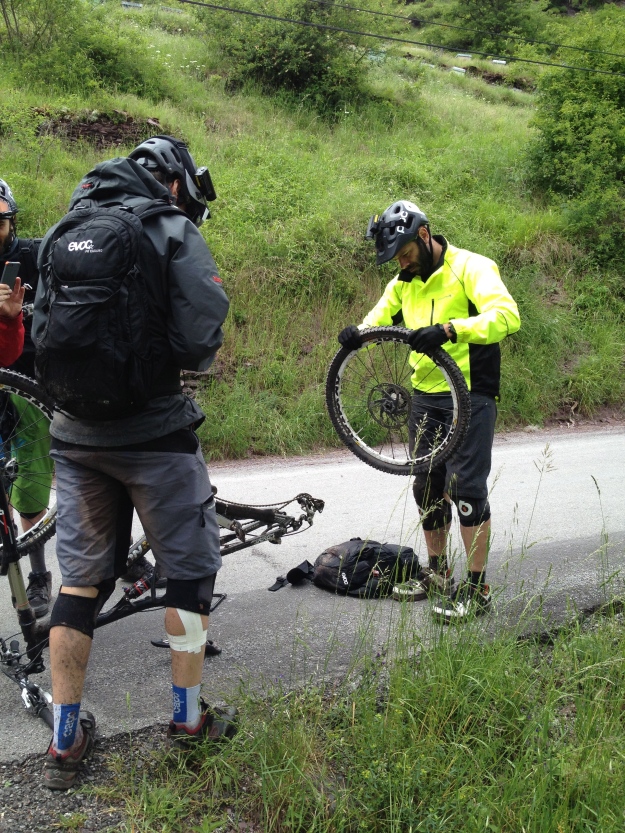 “Fuck, this is harder than putting on a rubber… Not that I can remember how to do either”

This was an extended change as the boys battled with a bad rim and tire combo. I took the chance to not help and lie in the grass… Making myself useful taking this now famous photo of the DIRTY NOMAD! 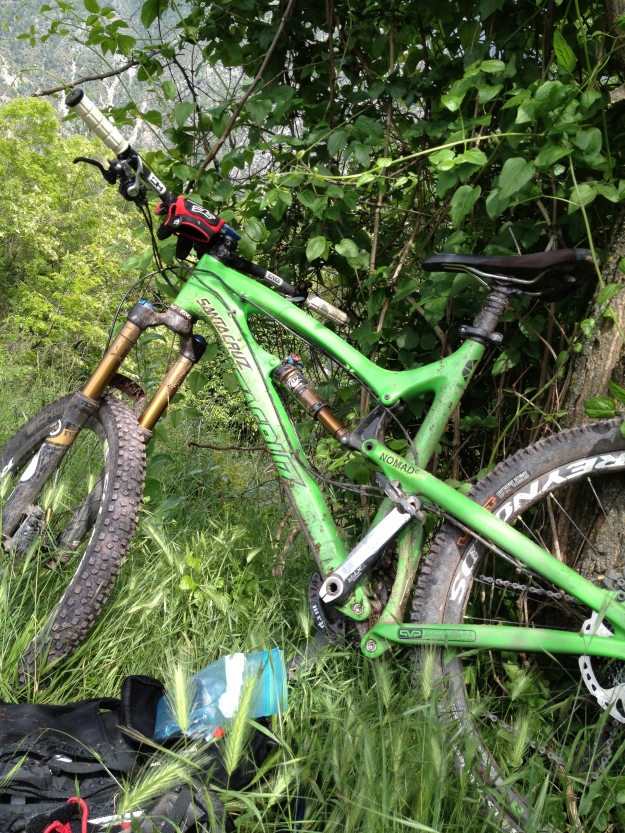 The best use of carbon fibre ever

We finally managed to get going again, into some super hard, tight and slippery switchback to end the day. It had been a hard one for sure, and we were all pleased to hit the finishing village and grab a beer: 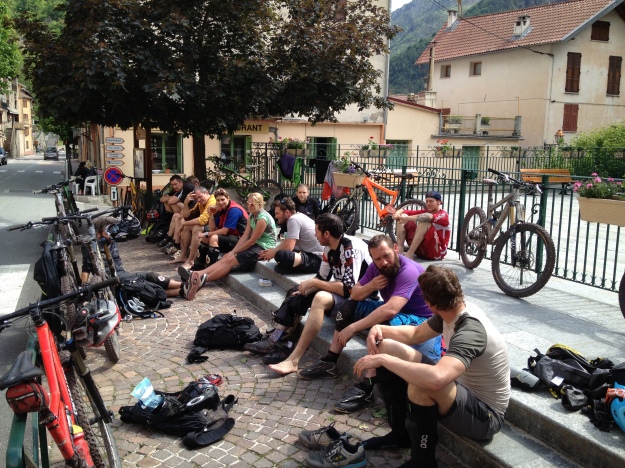 THIS is how you end a ride… Sweeeeet

Normally day 4 would have been a cunt of a day anywhere else and god knows I’m a hater, but every time it got hard this simple fact remained:

We were in the French Alps, with our Mountain Bikes, with our mates, riding awesome terrain and pinning it – This is living.

Back to the future – How did the day 4 racers get on in the real Trans Provence yesterday? Check out another awesome edit from the event yesterday. Loving the dog chase near the end, as if it wasn’t hardcore enough already!