I thought today would be the back on the bike day, but realistically I am still out of action and with no sense of irony, holed up in Tauranga trying to get well. 98.5% of people that live in Tauranga are retired, so they know a thing or two about chilling and recovering from illness, so I’m fitting right in.

Today was also supposed to be a Rotorua ride day, but that’s gone by the wayside… To say this is frustrating is an understatement and its not lost on me how bizarre it is to return home in summer to only get too sick to ride. My reaction to this has been extremely mature however, and I have done the only thing anyone would do in my position – Ram myself with every pill available in a pharmacy, just like any good PRO: 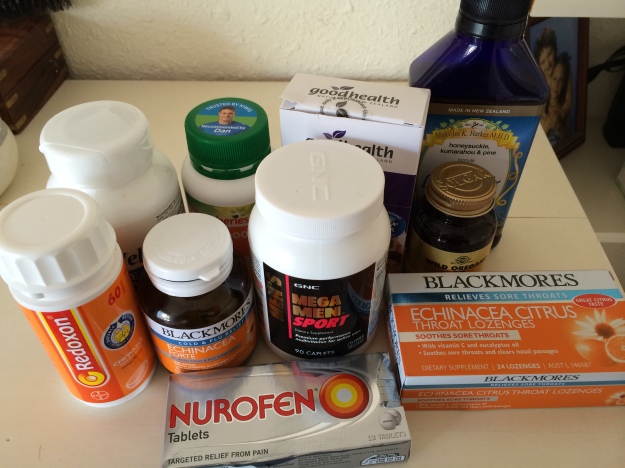 Forget for a moment that many of these cancel each other out, whats more important is that I have Vitamin C that’s recommended by Dan Carter, so fuck, if that doesn’t help the situation then nothing will.

I have also taken the chance to catch up on movies, my third favourite thing in life after Cycling and Girls (the order of those two can be interchangeable based on conditions and its not lost on me that they don’t always get along), heading to the worlds strangest little cinema here in TGA to see ‘The Wolf of Wall Street’ (very good movie, recommend) and ‘Anchorman 2’ (it pains me hugely to say this, but its not good and wait for the DVD).

So, the plan now is to get well, resist the urge to ride when sick (which is the usual practice) so that things aren’t compounded and then go about the task of getting this summer tour back on track! And I literally mean on a mountain bike track… Once healthy, I intend to ride every day as the sting of missing 4 already burns deep… Especially when I see everyone else smashing it on Strava and getting fitter… Gaaaaaa!!!