Recently a modern day cycling Confucius had these enlightened words for me:

“Nomad, you know what they say about cyclists: You have either broken your collarbone, or are going to…”

Hard to argue with really, but not worth dwelling on at all if you’re in the second camp. What he didn’t point out to me was that breaking it in 3 places at the same time as breaking your elbow into 4 pieces is super cunty to say the least. But, thanks to a very good (read: expensive) surgical team at Mount Elizabeth hospital, I have been put back together again in full humpty dumpty styles, just with more metal involved: 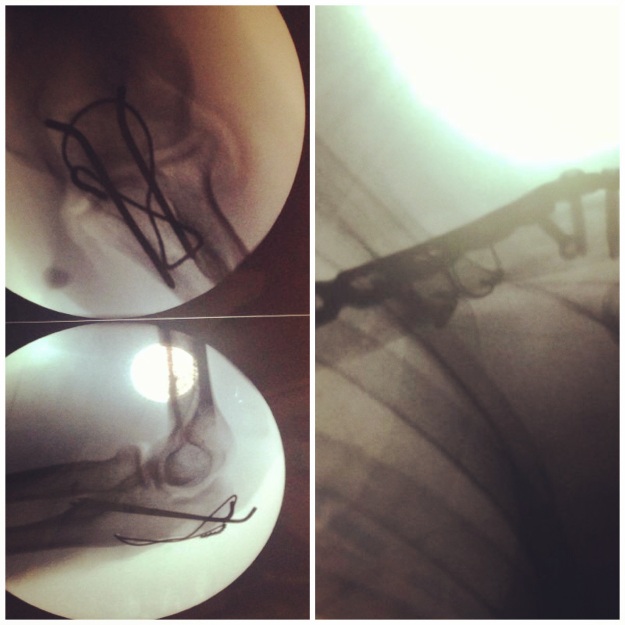 Regrettably, I don’t feel anything like a Terminator, which is a massive let down, I assume I will just have to wait for the future to arrive. In the mean time, I am looking at these numbers with a raised eyebrow:

What does this represent? Well, only the longest period in 25 years where I won’t be able to ride a bike… A somewhat sobering prospect to be honest. If form is like money, this is the equivalent to investing all of your hard earned cash into a pyramid scheme that was offering such a good return you should have known it was BS, especially if it had a hidden fee structure. That’s right, its a total wipe out.

So yes, it has given me some time to think about racing in shit hole locations as I work through watching the entire DVD collection of ‘Breaking Bad’ (fuck, no irony there) and in summary I have made a pretty simple, straightforward and irreversible decision:

An elbow jerk reaction I hear you think? Well, no, not really. Allow me to get my elaboration freak on here, which I will do in a rather un-PC way, so if you’re a bleeding heart, prepare to get your back up as well…

1. Its not the crashing – Its the aftermath

So, I know that crashes can occur any where, any time whilst on a bike… No argument there and I know that there was plenty of carnage in the first round of the NI series back in NZ earlier in the year. That’s not my point though… Yes, when you’re racing in supposedly ‘exotic’ locations (a fancy term for a shit hole), the roads are lower quality, traffic control can be marginal and all sorts of crazy shit can happen, but you’re sort of prepared for that when you sign up to race in Asia.

What I hadn’t really thought through was what happens when it goes terribly wrong?

Well, as I found out, shit gets quite difficult. No one ever plans to get cunted up massively at these races, but as I went through the extraction process it occurred to me how difficult it can be and also, how risky a proposition it may ultimately become. It took an hour from hitting the deck to seeing an actual Doctor, during which it occurred to me that if I had internal injuries, was bleeding out real quiet or had some sort of spinal issues (like the rider next to me in A&E), that I would have been severely fucked to be blunt.

I’m not going to shank the race organisers too much here, they already have enough awful stuff to deal with based on what happened on the Saturday, but to be blunt, there was no way a TT should have been run on those roads. This was a pretty unanimous position from all the riders I spoke to. Whilst the crash was my fault, I still found it bizarre we were racing in such a shit area, it even made Bintan look upmarket FFS.

There was then the small issue of how the fuck do you get out of there and get to the medical treatment you need? I’ve done a few of these races now, but had never considered that I would have to Evac out the way I did. And let me assure you, when you get fucked up your first priority is wanting to get the FUCK out of there ASAP. Call me  a cunt, happy to wear that cap – But I couldn’t find a single person that wanted to queue up to have surgery or a lengthy recovery in a small town in the South of Philippines… Yeah, thats the litmus test isn’t it really? So put yourself through that scenario and then decide if I’m being too harsh…

I suspect that this aspect coupled with the ‘what if’ factor relating to medical care have been key drivers in me pulling the pin on Road racing in remote shit locations, but then again there is always point #2;

This is probably easier to digest, thanks to this list:

Yes, all the places this year that I have had an absolutely awesome time, ridden with some of the best people I know and come away with golden memories and experiences. On paper, some of these are very high risk, which thankfully never materialised.

Did I finish all these trips saying “Fuck yes, that was epic!“… Ah, yes… Did I walk away from road racing in shitbox locations saying the same thing? Er… No… Most of the time I was pleased to either survive or arrive unscathed, especially after the last Coneageddon race in Malaysia. Obviously the risk levels feel disproportionate to the reward levels that one will receive. I enjoy road racing when its a decent course, event and is well organised (not to mention safe)… Which is why I won’t be rocking up to anything in the region any time soon.

I realise my position is going to get mixed reactions, so some advice and tips if you still feel compelled to go racing in the killing fields, then here is some pretty basic advice or things that are worth considering:

So, I respect that some will smother this post with Maldon Sea Salt on the basis of me being a grumpy fuck sitting around waiting to heal up, but realistically what I have written here is a direct reflection of the experience I had – And its not one I would want any other rider to go through. No one ever plans to eat shit and its important to NOT focus on it as it become self perpetuating, but everyone should think about their contingency plan. Oh, plus, its JUST amateur cycling ultimately. Hate to break it to people, but your chance at being PRO passed by 10 to 15 years ago, so keep that in perspective.

I still love road riding and will continue to do a shit load of it, but will be super selective about which road races are entered, besides, going FULL ENDURO is a significantly more appealing prospect… Good luck to everyone racing at Bintan in a few weeks!