It’s always good to do something a bit different or unique… Mix it up a bit. Whilst most of the NZ trip is designed to be MTB orientated, with variable weather some road work is going to be on the cards, but when I do it, I want to make sure its going to be noteworthy and not just run of the mill.

Its kind of a big deal around here and it has many leather-bound books because there are very few HC climbs in NZ, especially in the North Island. Sure, they are littered like sweet candy through France, Italy and Spain, but down here there aren’t too many climbs with this kind of profile, so it was worth throwing on the list.

If you know anything about boys, our planning and comms can be as accurate as a squad of storm troopers shooting at a famous Rebel character, so it was with no small amount of amazement that we all arrived in Ohakune at roughly the same time to get our climbing freak on. Showing he is an original hard bastard, Tijs decided he needed a 100km warm up in showery conditions by riding down from Turangi:

Yes, I was the only one not on a power meter, which unfortunately excluded me from the Power Rangers briefing and tactics talk on the way to the base of the climb:

“My cock has swelled up, so I shall sit on 350 watts”… “Well Tijs, my balls have grown exponentially, so I shall select 360” etc etc

To be very fair to my team mates, they like their Power set up, but thankfully have not turned from Power Rangers into Powercunts, which is quite a different breed of rider altogether… the PC is unpleasant to ride with, as they just want to ride with their powermeter and not you, whereas a Ranger will still roll with you, only occasionally surrendering to those shiny little wattage numbers that beam at their brains wanting attention. No question though, the boys were right into it from the get go, with the hammer going down at the base of the Mountain: 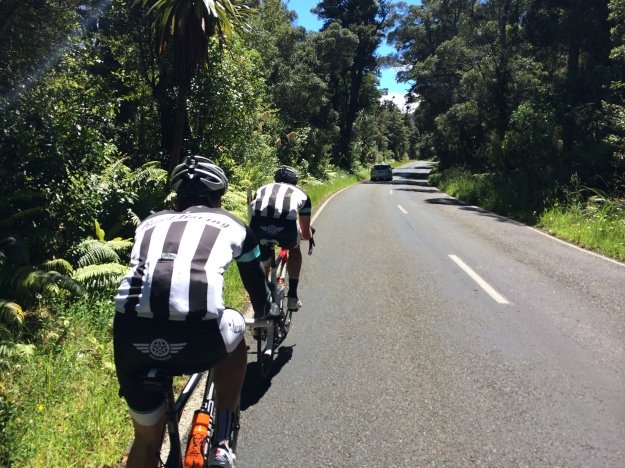 When under pressure and at threshold, its always a good idea to fumble around taking iPhone photos…

About 4km’s in Ango had worked out DN was not going to offer a whole lot of KOM Domestique value with all my holiday junk food fuelled love on board and decided to turn the screws on an 18% section whilst I tried to spit out a burst lung on the side of the road. Not helping me was my penchant for ridiculously taking iPhone photos whilst being dropped, a habit I need to break for sure: 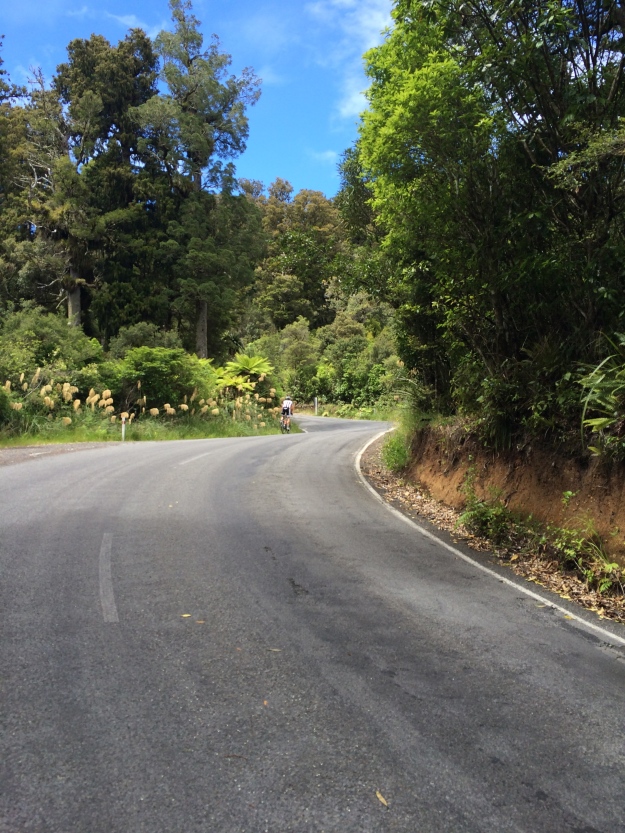 “You said we could ride it together!”

Even with 100km’s in his legs and a pie in his stomach, Tijs wasn’t sticking around either to discuss gear ratios with DN… At least the scenery was top notch, thank fuck for that as my form clearly is NOT at the moment! I can sort of see my friends from here:

Maybe I need Vector Pedals after all… hmmmm…

I have to say, this climb is quite stunning… The bottom 5 to 6km’s are a nice gradient with some pitches in them, but overall its not too bad. In summer the road is very quiet as its one way and the bush, which we love as you know, was awesome. The top 5km’s however offer a real contrast… Steep, windy, cold and its clearly had its bush stripped away by a laser (giggle):

More often than not, the top of these types of climbs can be brutally hard and Ruapehu is no exception. Whilst we were sweating like 10 year old shoplifters down the bottom of the hill, the top of the mountain was cold, steep and dare I say, even a bit cunty… I was really having to grind it out, in-between bouts of disgust at my current fitness levels and climbing form:

Somewhere up there is a glorious mountain top…

The last 3km’s felt like they went forever, aided by some rather steep pitches, a bit of zig zagging and being more blown around than Mr Clinton on intern orientation week. I was pretty happy to see the top, even if I was an embarrassing 5 mins down on Angus, who knocked the bugger off in a nicely done 1 hour flat, good enough for a top 10 on Strava and kuuuuudos mate given it was cock like conditions at the summit:

For those of you that are adrenaline junkies, I have two suggestions for you that are pretty cheap and certainly a lot scarier than Basejumping or sky diving: 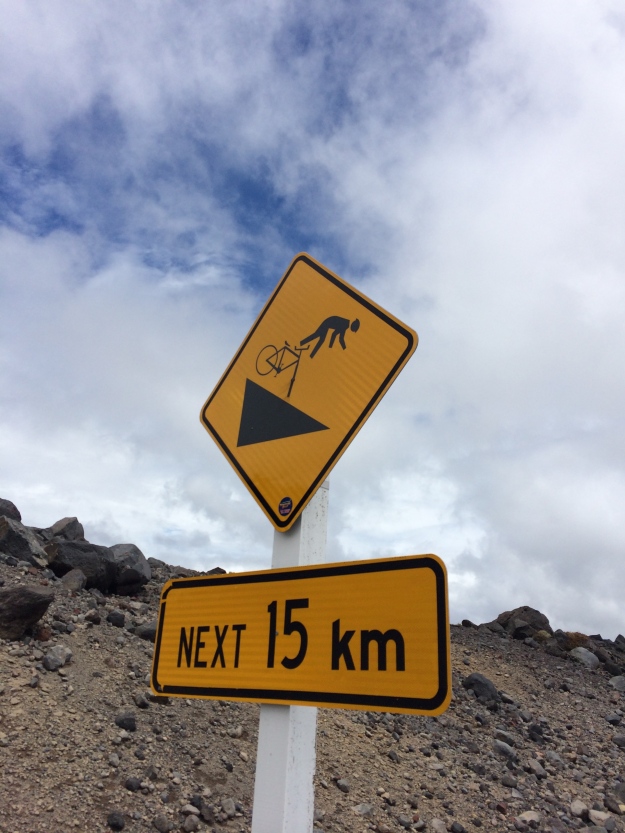 I also tried to bring you a “Lord of the Rings” shot, but some fucker photobombed it to shit, clearly stoked with himself: 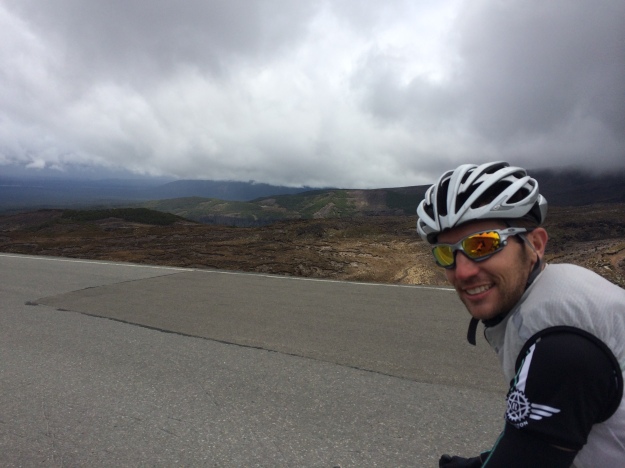 “This photobomb only required 20 watts”

It takes a lot to make the Cannondale Evo feel unstable, but there were a few moments on this downhill where the wind gusts, shit road camber and gravel did a good job of making my ass muscles tighten to the point of cramping… As per usual, going up is hard and can be a grind, but coming down is fart noise inducing. I then sat around after clocking my ridiculous 37km ride while the HARD rivet set off to ride the 100km’s back to Turangi. I ordered a saucer of milk and a tail brush and took my seat at the fire to give them a head start.

When I finally caught up with them riding in miserable conditions, I found Ango being chased by some angry commuter, you know how these people in Fluro vests on their way to work can get, sucking wheel so hard they may as well be from Thailand:

Whilst we gladly mock the Evil Dirty Busosaurus, this was one time that the boys were more than happy to jump into a vehicle that is usually seen loading up an army of ‘Maureen’s’ to head to the bingo hall, as per usual, Ango shotgunning the Mother F: 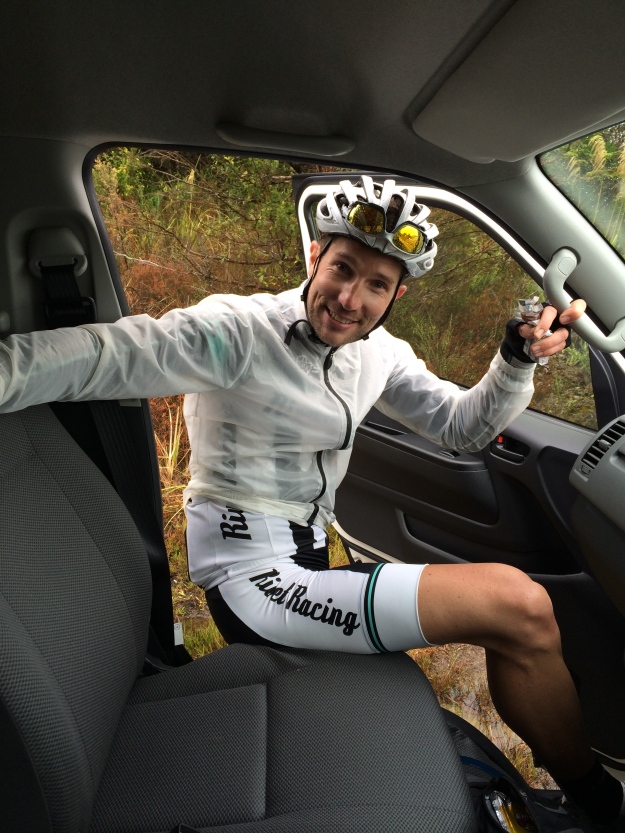 “How many watts can this Bus pump out?!!”

A fun day out with a Rivet subset, I didn’t see them too much getting smoked all over the mountain (up and down), but great to be riding with the lads again. My advice – If you like climbing (Logan, GV etc), then hit this road, but pick a day with low to NO wind to avoid an epic grinding face job!