With not a lot going down back in Global Hub HQ, its time for something a little different over the next couple of days. Its taken a while to piece this together and its a bit HACK in places, but is time to do a bike flash back series. For those of you that say to me “I like your blog, but its a bit bikey”, then this isn’t going to be your day I’m afraid (plus, get a life and get a bike mofo’s), but some of these pics are a tad funny in terms of being old school.

As threatened, I managed to ‘digitise’ some of my old riding photos, by digitise I mean take really shit iPhone photos of them while trying not to shake. Some fucker offered to do it professionally, for $7 per photo! WTF… that’s heaps too much eh! So, I went for the free option, sure, quality is marginal but the DN CFO nods with delighted approval.

Its also worth noting that unlike ex-partners, counting the number of bikes you’ve had is ok… They are integral to the journey and each one has its own set of stories, memories and emotions attached to it. I’m missing shots of the Scott Sawtooth and Boulder, but lets start with some real quality action from the mid 90’s: 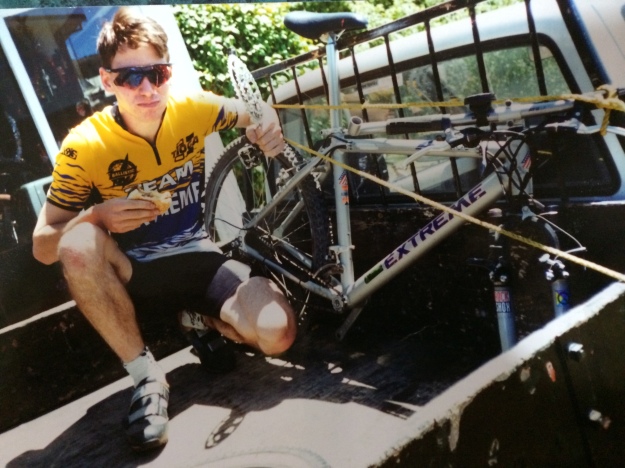 Where do we start with all the problems here…

Far out… Hairy legs, oversized Oakley M frame lenses, WTF matching riding top and a pig of a bike with Rock Shox Quadra’s on it. Note this was post a ride with the mythical beast that is Spanky, he made the ditch jump and I did not, hence the snapped BB and crank in my hand. Not much has changed based on how many jumps I cased at Whistler this year. Also important to note that calling something ‘Extreme’ in the 90’s was super cool.

Missing – The Avanti Competitor: As IF I was going to put a pic of an Avanti in here! Sure, it was state of the art at the time with the new Rock Shox Judy fork and a full XT gruppo, but no matter what it did, it was still an Avanti. Boo.

Here was a real bike… It screamed RACE me all the time, which I did all through 1996. Yes, back in the day when you raced downhill on the Saturday: 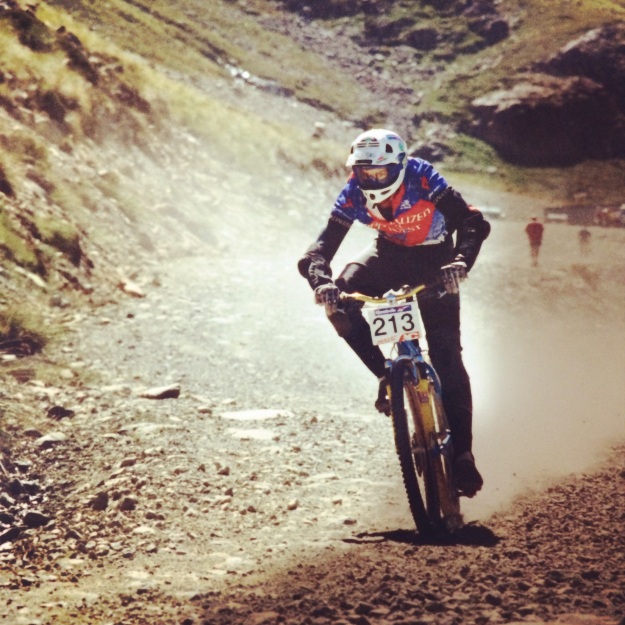 Possibly the best cycling photo I have ever had – Lake Ohau ski access road, 9.5kms long in around 11 mins

And Cross Country on the Sunday: 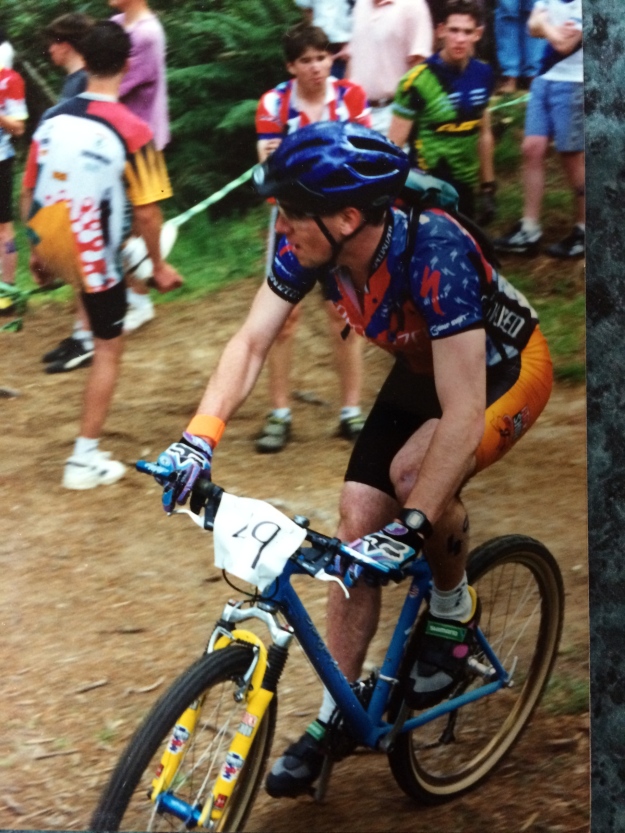 Possibly the worst shorts I have ever had… Note Onza bar ends and matching Ringle front hub, I’m kind of a big deal…

Never before has a bike been mocked so heavily, yet been so effective. Terrible name, but actually went better than it looked and I shall always fondly remember it for being the machine that I won one of few MTB races on, a North Island cup round in Taupo. Seen here in ‘Freeride’ mode after its retirement from racing, I was amazed that Carbon swing arm never let go. I had the fabulous 1997 season on this bike, podiums galore and a shit load of good times on tour with Il Lizardo: 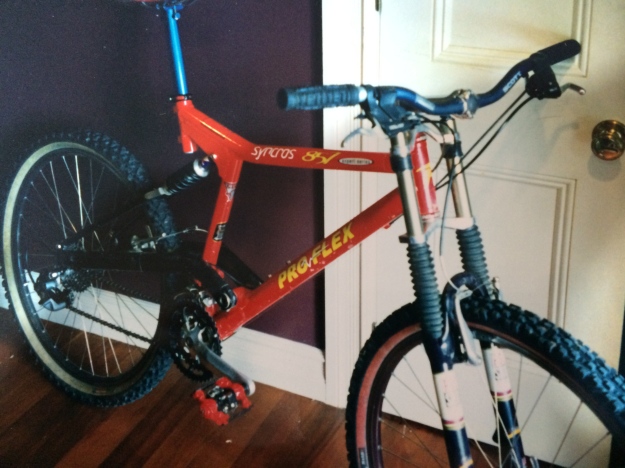 Widely mocked, but the Poo Flex was ahead of its time

The steed that was to see me survive the step up the knife fight in a telephone box with a dwarf that was the Expert under-23 Nationals in 1998, the ill-fated campaign that was terminated after a horrendous round one. Insanely light, climbed like a monkey sniffing glue and still remains the flashiest and LAST hard tail bike I ever owned: 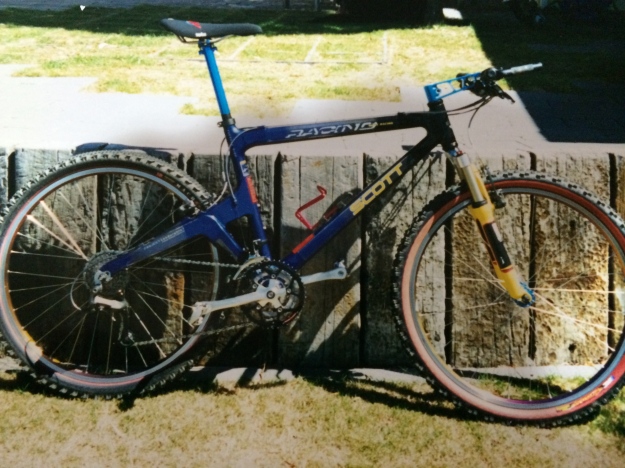 SO much bling, alas, all show and NO go from me…

The end of the XC glory days and the dispatching of the Scott gave way for possibly the greatest bike I have ever owned… Hard to say, but this one certainly provided epic amounts of fun and good times. Back before Enduro was Enduro and where this was considered overkill as a bike you’d ride on trails. It was a beast: 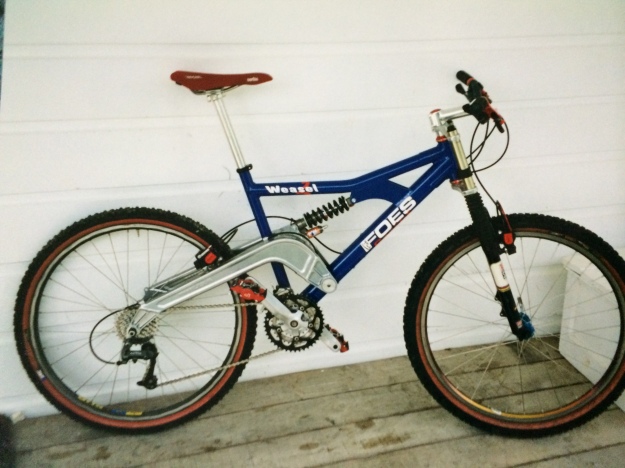 2 bikes were sold to produce this epic piece of machinery

It went through many guises, including being the first bike I had with a disc brake, seen here on the Rock Shox piss-low fork. Note insane volume of Seat post sticking out there, holy fuck, not a dropper post in sight: 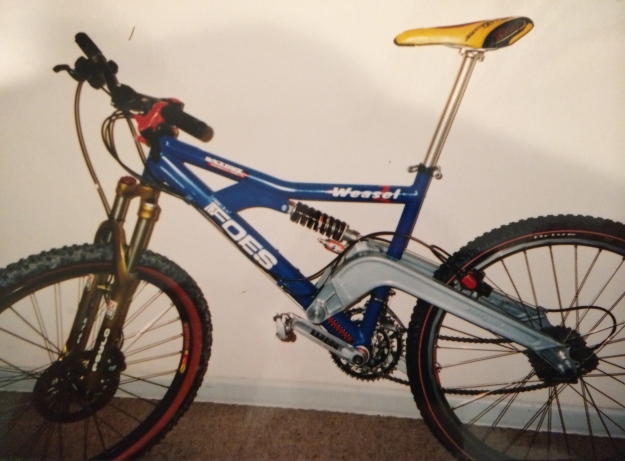 That’s a flash as ride there bro

Warning – Graphic images. As amazing as the Weasel was, it met a gruesome end when I launched it off a curb one day, I still recall the moment of horror when it decided to let go like a loose turd: 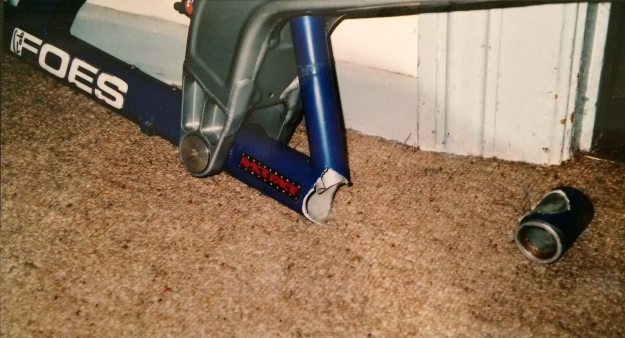 Rushed in as a replacement for the terminal Weasel, it fair to say that me and this bike never gelled together… It just didn’t seem to work out between us. Cutting a shit load of travel out didn’t help, did look nice though… But like one of those relationships where you know from the first date its fucked, this was that: 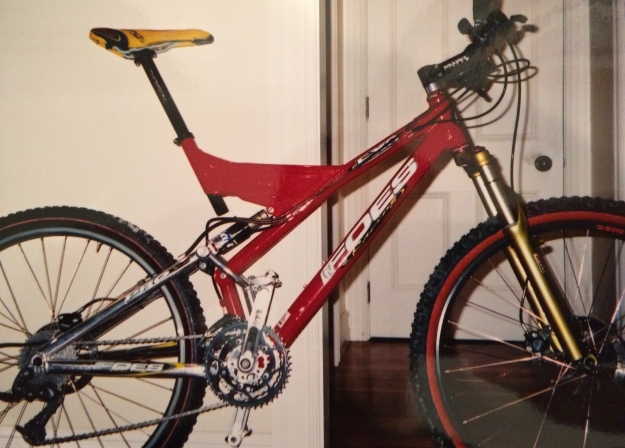 Pretty, but not much fun

The saving grace to get us back on the MTB map following the demise of the Weasel (we will always mourn you), and the fling with the FXC, the FXR was to fix all. Instead, it became the biggest disaster ever. Like a Promo girl at a car convention, looks hot, but a fucking nightmare when you spend some time with it: 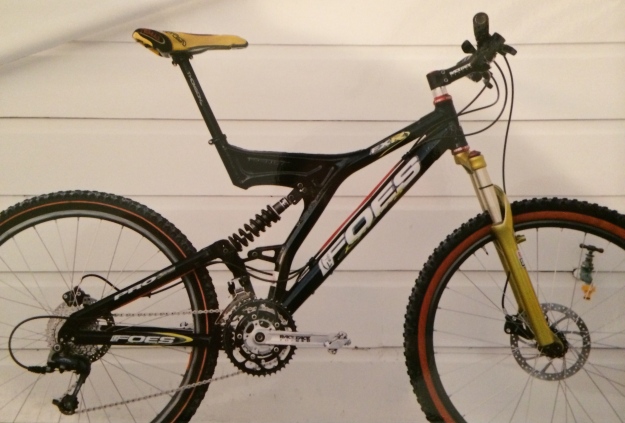 Looks awesome, but nothing but a pure cunt

Its hard to know how to explain it, but after the 4th new rear swing arm and the wrong shock spring multiple times, as well as a rear brake that never worked, it was time to dispatch this absolute cunt machine and move to a new up and coming brand that looked pretty cool…

Here is where the love affair started… Not sure of the year, but when the Prez agreed to sell me his HOT Santa Cruz Heckler, I was introduced to the brand that has become synonymous with awesomeness. This was the last US made Heckler and I had years and years of amazing times on this brilliant piece of MTB history. I loved this machine: 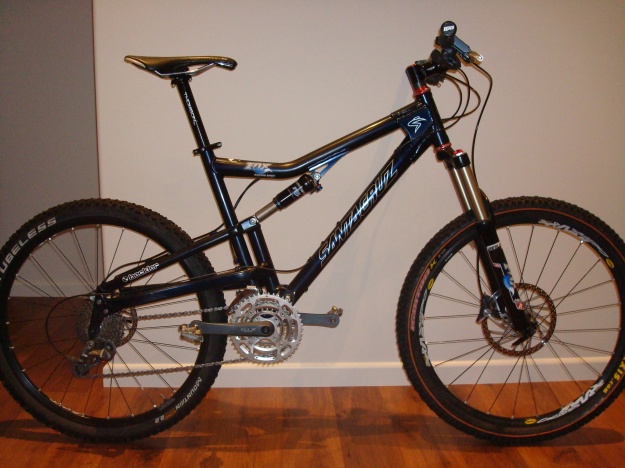 Faultless… A legend in the annals of DN gear history

I have lost count of the rides and stories this thing generated, but suffice to say that it left such an impact on me that when it came time to change and get something new, what did I do? You guessed it;

Huh? Yip… Years later, I was still so in love with the Heckler I just had to get another one… Oddly, I never felt quite as comfortable on this one as the old one, not sure why that was, but I am sure the old one was slightly more epic. Still, this had a top notch build as the time and unfortunately for it, this one got subjected to the horrendousness of Asian jungle action and mud. This was exacerbated by my initial penchant of water blasting to clean it in Singapore, which after 6 months and a complete rebuild I worked out wasn’t a good idea: 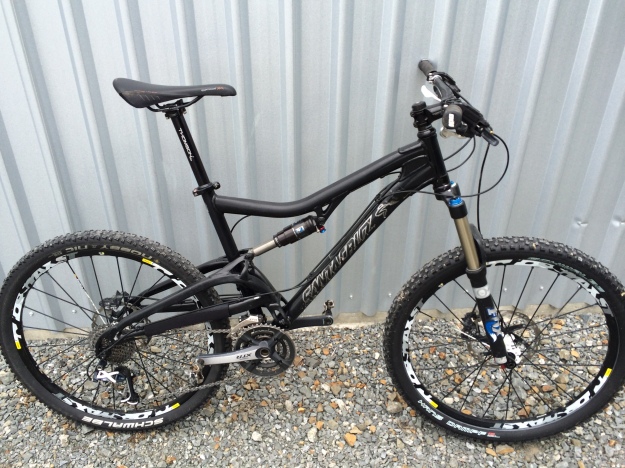 This is a case study in how trends date so quickly in MTB, 32mm fork, 3×9 drive train, narrow bars and no dropper posts – All items that make a contemporary mountain biker want to vomit into their own mouth. But the beauty of this bike was it could do everything… Trail riding, shuttle running and I even raced it in 12 hour relay races or XC action, hard yes, but shit loads of fun: 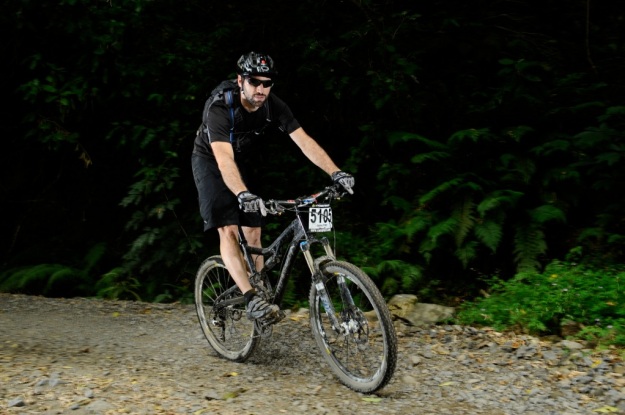 First purchased as a quarter life crisis, it took 2 years of sitting around before I finally got it to Whistler as originally intended. Two amazing trips out of it, but alas it was dated almost from when I purchased it. An irrational bike that was actually a lot better than it looked, excellent for bike park action, but hard to keep after those days on the V10c: 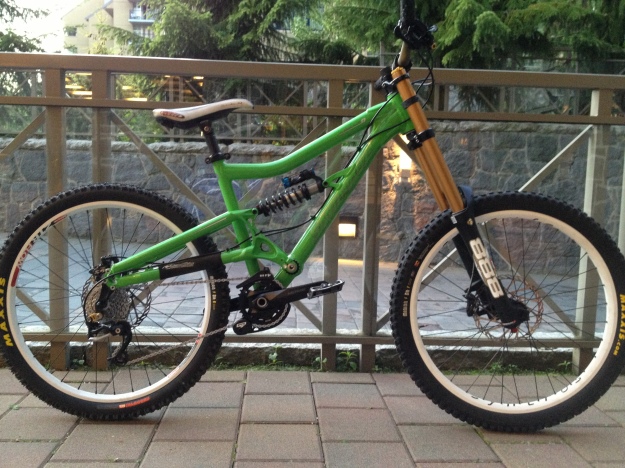 A somewhat impulse purchase (well, everyone else was getting one, so I had to have one too), the original intent was to have this machine for Trans Provence. However, try as I might, the chemistry was just never there. I knew it was a good bike, but we didn’t gel and in the end, the executive call was made to ditch the Jekyll for the Nomad Carbon, zero regret there: 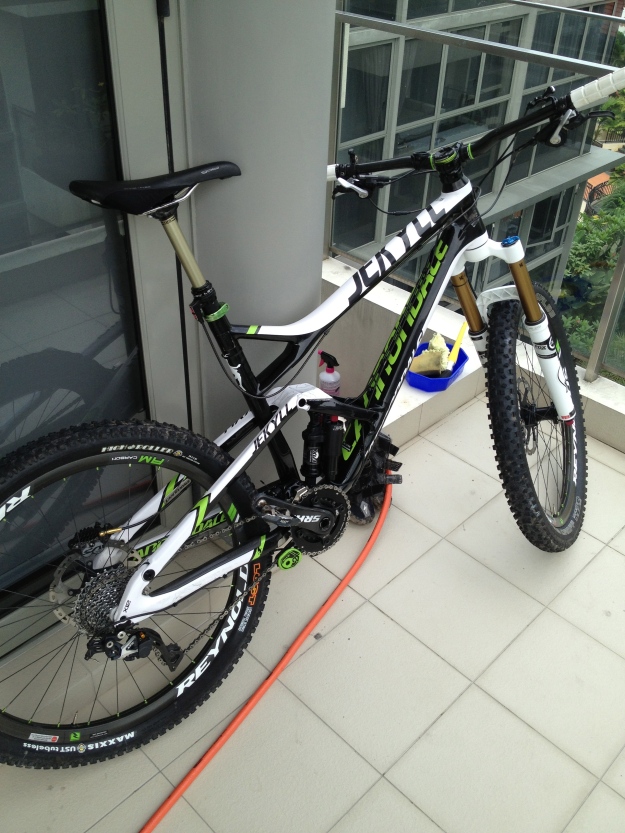 I know you were hot, but you’re just not for me…

I haven’t delved into the modern fleet, but all of these bikes are no longer with me, consigned to the pages of history. Each had their own story and provided thousands of hours and KM’s of enjoyment (some more than others) and contributed to the mountain biking montage that I have been working on since I was 11… That’s a lot of fun on 26 inch wheels too let it be noted!

Tomorrow – The road bike run down…