To get the traditional summing up post going, there needs to be an important upfront disclaimer – I fucking love Japan. Its definitely the coolest place in Asia to visit IMO, and if there was a spare room going at the Hawk HQ I would be moving my reduced possessions and 5 bikes there ASAP. If its ‘on your list’ of places to visit, expedite that shit to the top and get booking. If you’re wanting to go there for cycling, then hopefully some of the below is helpful.

I had some valuable reader feedback this week as well – Along the lines of: “It looked epic, but all your stories are the same – ‘I ride up a big hill, I got dropped, its fucked me’ Why do you do it to yourself?” I like to think I’m semi responsive to feedback, except for when its dumb, so I shall do this summary post without a single mention of how hard the hills are… Or the fact the Welsh Assassin spent 4 days KOMing all over Japan.

Important we start here, as it underlines what a BIG 4 days in the saddle it really was. This would usually make for a massively solid week on the bike, let alone 4 days, quite pleased with this lot just quietly:

Its probably one of the biggest trips in terms of volume, especially in a short space of time… I would probably recommend a rest day in there somewhere to be honest, do some touring around and then hit it again.

1. A word on location and accommodation

We stayed at Northstar on Norikura, and I have to say it was excellent. Why? They covered the essentials:

Plus, you get to sleep on the floor with your homeboys, so its just like being 10 again… So no actual change from an emotional age perspective:

We even had the run of the place for the first few days, which left plenty of room for our man purses: 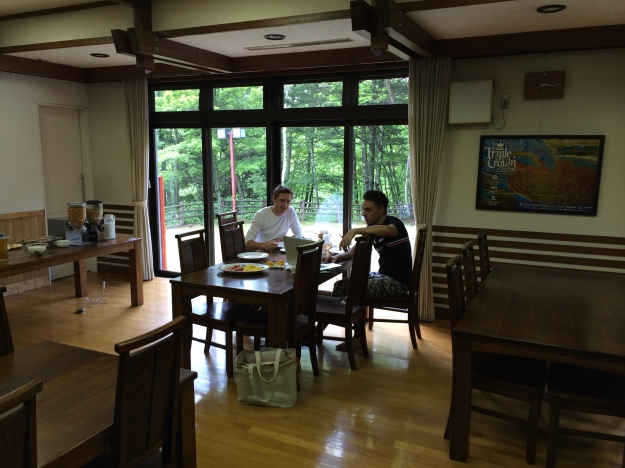 That’s right little people… Have another 4 to 5 Sauosages

Want to hit them, here’s the link: http://norikura.co.jp/en/?portfolio=northstar-outdoor-adventures

As for Fuji, we went high-end and got the traditional experience, which is not to be missed… Er… Aside from Breakfast. I can’t climb mountains on Fish to be honest, especially the day after… Ah… a really awesome time in the coolish mountain air and snow line? Place was flash as eh, with a golden view of Fuji across the lake.

In terms of nailing a location, Norikura is hard to go past. Out the front gate we had a cross road heading in 4 different directions. Like some moments we face in life, all different directions led to a unique route that you could make equally amazing and epic, it doesn’t get much better than that. By placing yourself at this epicentre location, your route design and options are endless.

But there is more to the Alps than this, there are whole other zones we never got to, which screams REBOOT to me… Sequel anyone? But, as a starting point then its hard to go past the Norikura HQ, good restaurants nearby as well. Fuck Japan dominates on the fried chicken front as well, massive bonus.

2. A word on format and logistics

We did Alps and then Fuji… Which is a 2 hour or so drive in between. On reflection we were probably tempted to do Fuji first and then Alps, how come? Well, its closer to Tokyo and an easier start, so a bit of a warm up so to speak. Either way, be prepared for the escape from Tokyo and have your navigator primed. Chances are your in-car GPS will be as cunty as ours was, so make sure you have a google map back up and aim for toll roads ASAP.

Best to work out your arrival time and then plan generously for how long you need to get down to the Alps area around Nagano… If you’re travelling with a petite Welshman, also ensure you factor in many toilet stops, you can’t just truck on through, ha, truck!

Ok, so its fucking awesome, that much should be painfully obvious by now… But in all seriousness, why go to Europe when you can go here? If you’ve ticked off Col this and that, as everyone has these days, I would totally recommend heading here for something different, but absolutely under-utilised and rare. Did I mention its super deserted?

A couple of points to note however to make sure you maximise on the goodness:

Have to say, the Cannondale Evo’s were simply awesome. The ate up the above mentioned terrain and Cols with more gusto than I tucked into a Family mart fried chicken special. There is no BS with these bikes (PFuck30 BB’s aside) and they just get on with the job at hand in an elegant and refined way:

Mine had been componentry problematic prior to departure, so I did what you’d normally do with any spoilt Ex-Pat kid, just threw money at it. Turns out it worked well and all the bikes ran drama free. A few thoughts to consider on bikes and gear:

So, that’s about it in terms of being matter of factly with the motherfucking advice… A few final pointers in case you weren’t rammed enough:

Hawk’s only infringement was a rain jacket stolen from a homeless person in Tokyo… Tried to get WA in focus, but again, too fucking fast

Stay tuned for the Dirty Video coming out of Japan… Crafting gets underway very soon… Murghahahahahaah!