Its been a while between gear rants and I know they only appeal to a small cross section of followers, so I will try and make this one less techy and more focused on how much I LOVE this bike (as well as throwing in some vids), lets get emotional on it… Yes, zero chance of this rant being impartial. To get the ball rolling, here is THAT photo for like the 5th time – The Santa Cruz Nomad Carbon 2:

Why so biased? Well… Simple really… This was, is and always will be a dream bike. There isn’t one single factor that makes that the case, its a combination of intangible feelings mashed together with some technical attributes that are hard to match.

I can still remember when the Nomad Mk1 arrived on the scene – Big, bad, mean… a cross between a DH bike and a XC bike, with the DH part having the dominant genes. It really appealed to me as it reminded me of my old Foes Weasel II (RIP good buddy). I like big, longer travel bikes, to me its what mountain biking is all about. They are resilient, can do anything and are massively FUN to ride downhill. Do these types of bikes win hill climbs, fuck no, but thats not really their gig and they don’t worry about it, geeks they are not.

Years went past and I was never in the right space to get a Nomad. I loved my Heckler and the price for the Nomad was still eye watering. When the Carbon Nomad was released it only made the fevering and status anxiety worse. It was a dream bike that sat out there taunting me and reminding me that I wasn’t shredding enough to own one.

Then, oddly and out of left field I got the Cannondale Jekyll – In preparation for the TP trip. Now, its a good bike… Doc loves his and Jerome C clearly likes to win a LOT of Enduro world series races on his one… BUT…. Try as I might, persisting with set up, changing parts, riding it as much as I could, I could not gel with the Jekyll. Normally, not a huge problem, but I had a trip of a life time coming up and I had to be one with the machine. My gut told me I had to reject the Jekyll like a bad kidney and so it was time to invoke the emergency plan: The mighty NOMAD.

Instead of doing it the easy way, I decided to fly to NZ and drive to Rotorua to get the frame and swap the parts over, yes, that’s a good idea… If you like complicated logistics with a good degree of potential for failure involved. But, as the below raving photo essay will show, it all turned out for the best.

Why is this bike so insanely good? I could go on and on about its stiffness, its ability to machine rough terrain with reckless abandon, the fact it can climb well for a big bike, the way it rails through turns, its confidence inspiring ability or its sheer beauty of construction… But, its best summed up like this:

From the very first moment I got on it and pedalled 500m, it instantly felt like MY bike… That unspoken and familiar, natural feeling you get when its the way its meant to be.

Just where can you go with a Nomad carbon? Basically anywhere you want… Hence the name. To prove my point, here is overly gushy photo tribute to the Legend that is the Nomad (not me):

It all started in Rotorua this year… Giving birth to a 6.16 pounds healthy Green Nomad Carbon, here we are resting on the delivery couch:

I AM your Father…

No time to waste, BUILD it:

Thanks to the legends at Bike Culture in Rotorua (this is a seriously cool store and there isn’t a thing these guys don’t know about mountain bikes or how to build them, epic – If you want a Santa Cruz, make the effort to see these guys), later that day it was time for the big debut in the best place to test a brand new bike, Whaka forest – the TP training camp: 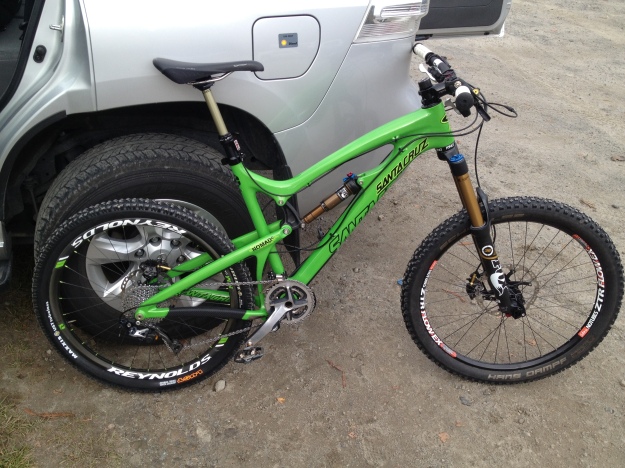 Oddly, last time I was here I was in a silver Prado as well, OCD perhaps?

Even rain couldn’t quell my fever for the Nomad debut… Ok, so I don’t look that pumped, but I was excited on the inside: 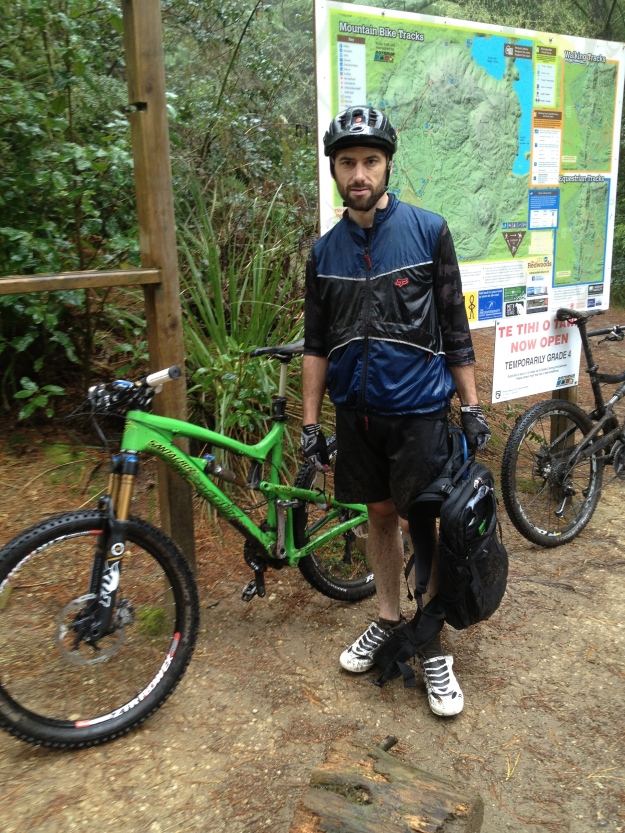 Wetter than a beaver… Building a dam…

Just how fun is it riding one of these things in Rots? Well, this video may do the trick trying to explain it (that’s Ango rocking the 1990’s Fox gear, respect it):

But alas, soon it was time to head back to the Global hub HQ… Singapore Nomad:

Yes, the whole point of this endeavour was the Trans Provence Tour! (https://dirtynomad.com/category/france-trip-trans-provence-tour/), and as such, it was time for the Nomad to hit Europe: 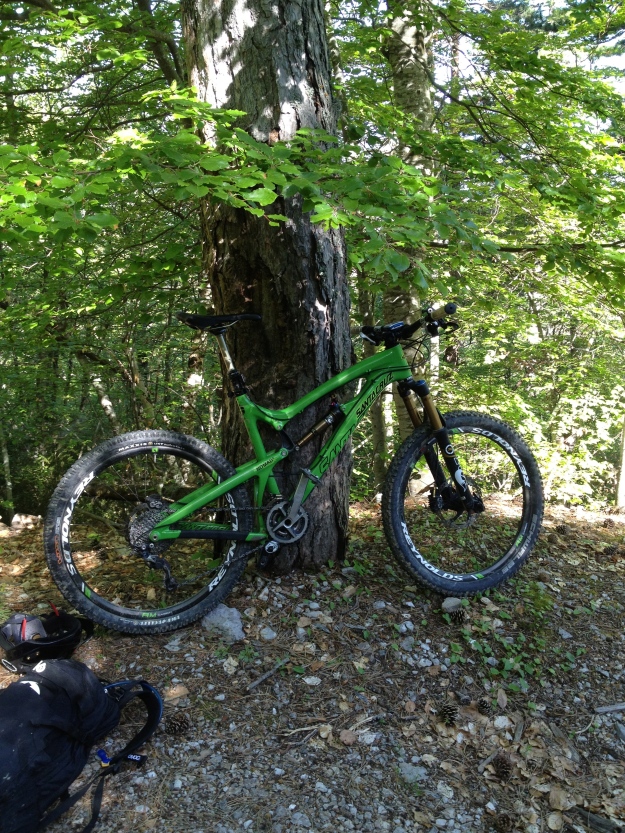 Dominating trails and trees in the Maritime Alps

The Nomad is all about versatility and exploring… You can put it on a trailer: 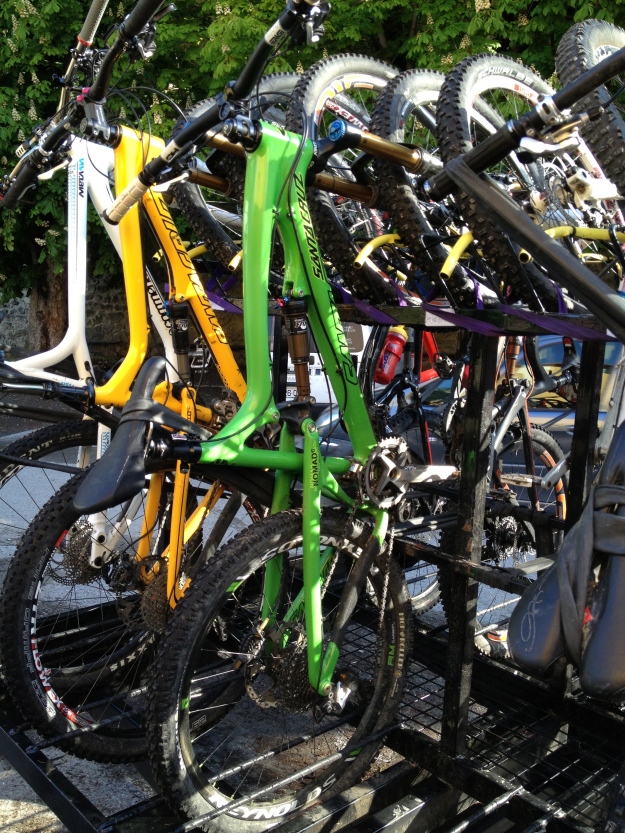 You and your shadow can take photos of it:

“Isn’t this exactly the same as the last 5 photos?”

It even goes with snow at 2000m before dropping in:

“You parked me in front of the snow for this cheesy photo? Fuck that’s lame bro…”

Or with epic French sunshine and heat:

And, if needs be, into a French wine cellar thing in Sospel:

“Don’t you dare jam me back in that bag… I saw what happened to the Tallboy….”

And, even in emergencies, its available for a coffee run down to Baker & Cook:

Yes, that’s pretty much every photo I have of the Nomad, a good way to make this an extremely long post… What’s that you say? ONE more vid? Sure – Nomad time:

Note – There is gratuitous fist pumping at the end, with good reason, day 3 was ALL time.