Well, today, there was another one… Not the most desired events, but lately there has been a lot of them:

As is the transient nature of Singapore, people roll in, bask in the glorious low tax world and then roll out again. I always knew this, but for a period of about 2 years it felt relatively stable with very few people leaving, but in the last 6 months the banks have burst and the load has spewed forth with abandon.

I have lost count of how many ‘last rides’ we have had recently and I have even missed a few due to travel or the evil haze, but I guess there has been about 10 maybe? Hard to tell. Its always a weird moment when you go for a final spin with someone here, you may or may not ride with them again, but its a chance to talk shit about old times and you can also see the departee going through that internal battle that goes through your mind when its the last ride, something like this:

“Its great to ride here from a weather perspective, but man this traffic is balls and I am sick of the same routes… but its been so good with the boys… but its time for change… but I will miss it… But I won’t miss this driving or the lack of hills… but damn these roads are smooth and there is no wind”

So, today, it was the Snowman’s turn to say goodbye, his last spin in Singapore before jetting to Brisvegas to buy a ute, a maroon jersey and commence the running over of small animals on the side of the road. Das Wolf and I provided the farewell guard of honour, we’re down to a skeleton crew it seems: 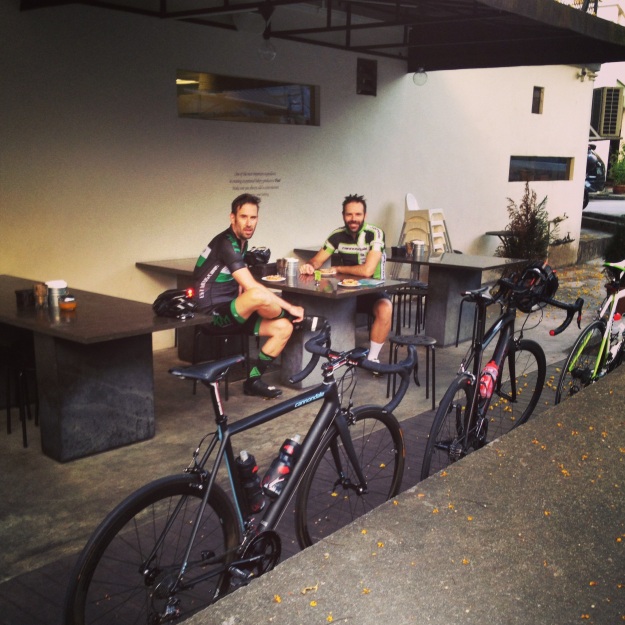 This morning and yet another goodbye took me back to my final Aka’s ride in NZ back in December 2009! Was a great final spin with the boys, Ango, Hams and the Lizard, check out the old school set up, clean shaven? Really… WTF:

Meanwhile back at Dirty Nomad Global HQ I am slowly working my way through the list of jobs (there is a list, I have a list OCD) to prepare for Japan, here is what progress looks like:

Someone nicked my wheels bro… Stink

But, I have taken a break from road videos to put together this mix tape from Whistler – It occurred to me I needed to mix my vids up a bit with different shots and material, so here is a mash up with some unseen footage and new stuff, get involved: