The weekend gone was almost like a photocopy of last weekend… A groundhog weekend of cycling for sure. From the #smashmyfacein Saturday session at Seletar grazing on the buffet of pain, to Sunday’s warm up and Crazies. I even managed to get dropped in exactly the same spot as last week for good measure. I then kept up this form by yelling ‘Cunt’ at the same place when I realised my attempt to chase back on wasn’t going to pan out… Luckily the rest of the news isn’t a copy cat today.

The big news from the weekend however was further north – With a battle of two featherweights of the MTB world going down in Malaysia Truly Asia (MTA). Yes, we were treated to Frazzle V Goat at another Malaysian MTB race. I wasn’t on the scene, but eyewitness reports likened it to the same as watching two retarded monkeys covered in olive oil trying to fuck a whale.

There had been a LOT of trash talking about this one, so much so that when it brewed over at coffee during the week I asked the weekend worriers to pose for a classic head to head (butting) moment to capture the essence of their knife fight to the death in a telephone box. Unfortunately this went sideways and became an intimately giggly moment:

Still, they managed to drop the smiles long enough to race each other for the prize of MTB Masters of the Universe (well, the smaller subset of ex-pat Masters MTBers who can be fucked traveling north to race in Palm plantations), yes, it was time to get into the jungle with 3000 sweaty lemmings and sort of do battle. Oh, I am not joking with those numbers:

Yes, its one of those days… The race was ON, until everyone got lost that is. This is where the story goes a little sideways to be honest. In this XC Geek Tragedy there appears to be two sides to the story. The Goat was of the view that it was no longer a race, but Frazzle wasn’t going to let getting lost in the jungle get in the way of a free coffee, his view being the Bert & Ernie cage of death was still all go. Meanwhile, the spy was so hungry he decided it was time to eat his handlebar for dessert after having jungle swamp for the main course: 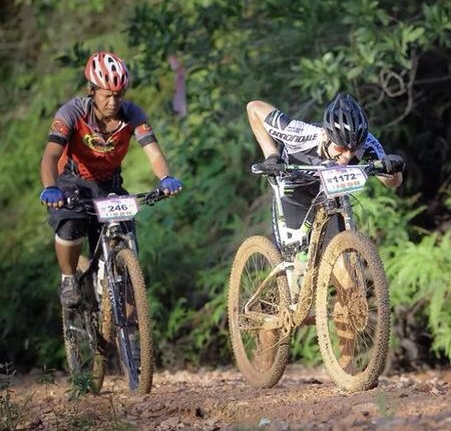 Should I spew or should I go now?

In the end, its hard to discern who the winner on the day was… Clearly NOT the dude who laid out the course, with it being a circus of the highest order. Whilst Frazzle did actually get across the line first, I think the motto’s of the story are (pick and choose based on your perspective):

“Achtung!” or “Gott en Himmel!” Or any other commando war comic German sentence you can remember

Its a rare occurrence we have a visitor here in the Global Hub, but I was recently graced with a visit from Doc Garfield from NZ. Gave me an excellent chance to practice my tour guide skills, which I used beautifully to take him for a ride so he could get a view of the conference centre he was spending all week in, followed up by dinner in a car park so he could sweat into his beer while eating what I told him was Sweet & Sour ‘Pork’. Authentic: 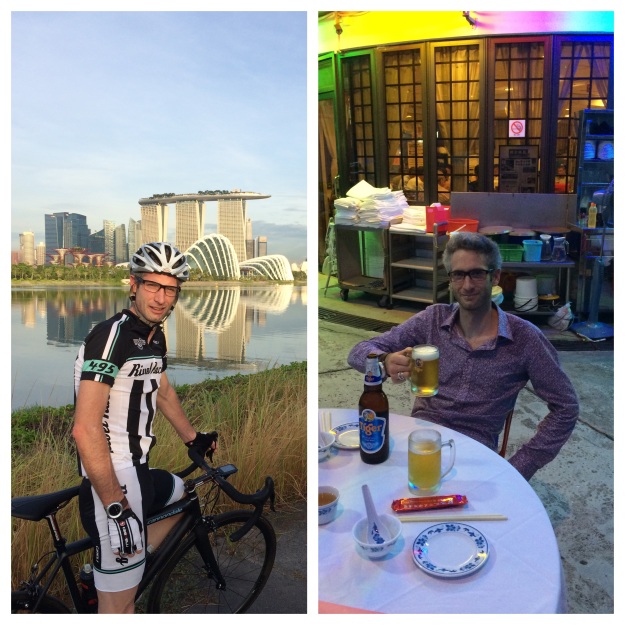 He’s a bit quiet, but I managed to force some conversation out of him whilst converting him to Super Record & Cannondale

Meanwhile in Italy, well, Ireland actually… Yes, as per the preview, Irish rain has been falling and causing more than its fair share of pain at the Giro. I was sort of joking when I said I put a Dirty curse on Garmin after my 800 lost a ride file the other day, but after LBL and now this TTT meltdown, I am starting to reconsider my power and reach. Yes, couldn’t get more cliche ‘luck of the Irish’ than this could it? Dan Martin losing it on Stage 1 and taking a few of the boys with him… Race over on home soil capping off a shit few weeks: 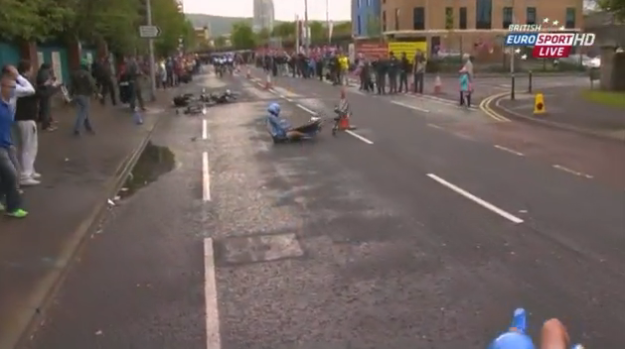 Last night was interesting in terms of not only seeing how cunty the Irish weather was, but more importantly getting a view on what a total MONSTER Marcel Kittel is. His come from behind (in more ways than one) sprint to win was epic and if I was a TDF sprinter I would be having a quiet shit in my pants for July. Cav beating his lesser team mate by 1mm in California less convincing than what Marcel managed last night. Also, If you haven’t already downloaded it, hit the Cyclingnews Tour Tracker App for your phone, its fucking awesome to get the low down on the race, assuming you’re not kicking it in front of Eurosport.

Speaking of kicking it… The opposite of that is happening right now on the lower slopes of Whistler, with the trail crew getting shit sorted for opening day in 5 days time!!! Its about this time of the year when I start to feel that fever and pull building… Yes, the place scares the shit out of me, but I still want to go back – Especially now I am armed with the Weapon of Mass Shredding in the Dirty Demo. It’s an irrational draw, with only pics at this stage, imagine what it will be like when the videos start dropping! Bring on Shredpocalypse II: 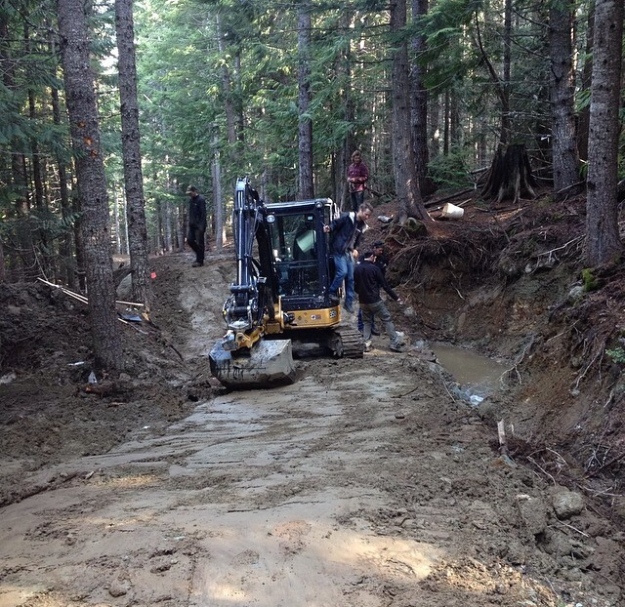 If you can just make the lip a little shallower boys, that would be grand…

Finally today, whilst not CFO approved, the Dirty R&D department has been doing some extensive testing and work on expanding the DN apparel line… Of course we’re starting with garments impractical for the tropics but excellent if you want to get into petty crime:

Of course, it wouldn’t be an outfit or let you dress like a street kid without a cap, so that’s in the mix as well:

Perfect for your next mid-life crisis

Watch this space – More focus groups being conducted to get the line up right, not to mention the sizing and logistics, yes, we are always learning.

Have a good week on the bike everyone, keep it as dirty as possible. Its a public holiday here tomorrow, which means fuck all to me, but should be fun to have some taxpayers out for a few more hours on the group ride!