Yes, you read the title correctly… I am super shit at keeping a surprise, so this isn’t probably as big an ambush as I would have hoped for, but never the less, that’s right… I’m off to witness something that should be on every Mountain Bikers bucket list:

Granted, I have seen the World Champs in Rots way back when, and I’ve seen an XC World Cup round on Mount Vic in Welly, but its the FINALS man and its totally stacked as well. Yes, almost all the categories are still up for grabs in the overall championship standings, so its going to make for an epic weekend of racing, not to mention spectating.

I also had an absolute fever to be in France in summer this year and original plans had to go on hold due to the reschedule of Shredpocalypse. When I spied the World Cup Finals being held in Meribel, it was therefore the perfect chance to tick two boxes at once… I’m not one to practice favouritism, but of course I am mainly heading to watch one discipline in particular:

Yes, its off to Meribel in the French Alps to soak up the sweet World Cup action and get some riding in on the Nomad… A small French town packed with all the World Cup MTB Pros, hmmmmm… You know what this mean right?

Its been a solid year so far running into some absolute legends during the various Dirty Missions, but nothing is going to compare to the gold mine of PRO’s kicking around town in Meribel just waiting for my awkward advances… Expect a lot more of this as I work like a Predator to add to my trophy collection: 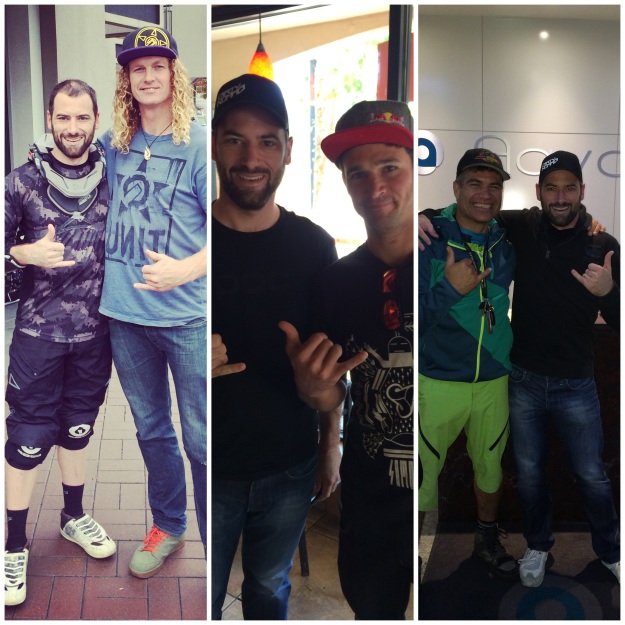 “You have no shame Brah… No shame…”

I shall also be aiming to bring you the Dirty low down on not only the race scene for the WC Finals, but also the riding around the Meribel area. This will of course hopefully include the World Cup courses, both XC and DH. Mind you… After watching this preview of the DH course, you may end up with an abridged version from me, that road gap looking BIG for a trail bike… Best watched in HD:

One thing that won’t be accompanying me on this trip was my trusty old Fox Gear bag… yes, anyone whoever came to pick me up from the airport in a small car hated this bag, but its been a legend and travelled more places than Roberto during the Cold War. Its literally come apart at the seams, not bad considering its debut was the first Whistler trip in 2011 and its been dragged around every country that I’ve Dirty Nomaded in:

Big enough to fit a boogie board in…

It all kicks off Sunday night on the SQ flight to Zurich… Yes, oddly I planned to fly into an airport that is even further away from Meribel than Milan is, which would have been a more logical option. Big tick for planning… I shall be taking in the local riding and then the WHOLE fucking weekend of crazed MTB World Cup action… Yes, even the XC racing.

Watch this space and let me know if there is any particular PRO you’d like stalked or an embarrassing photo taken with, I will have my pick of Mountain Biking Royalty to choose from!